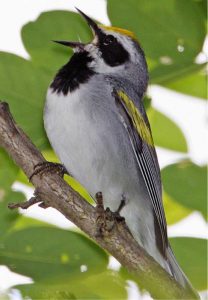 The AMJV partnership focuses on bird species in the greatest need of conservation attention. These species typically have limited ranges, small population sizes, declining population trends, or use unique or highly degraded habitats. Additionally, species that have large percentages of their populations within the AMJV region are also considered priorities, but they may not necessarily warrant immediate conservation action.

For example, the American Woodcock and Golden-winged Warbler spend much of their time in young forests and old field succession environments, both of which have decreased in abundance and quality over the last century. We are working with our partners to protect and restore these early successional habitats in key areas through active forest management and restoration practices to benefit these and other priority bird populations, such as the Prairie Warbler and Eastern Whip-poor-will. 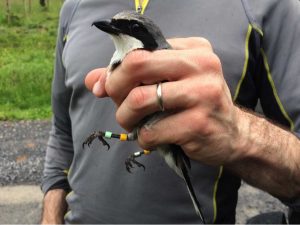 Eastern grassland species are also seeing extensive declines, such as this Loggerhead Shrike, which both breeds and winters in the AMJV region. Photo: Rich Bailey

Large blocks of mature deciduous forest also support many of the AMJV’s priority species, such as the Cerulean Warbler and Wood Thrush. The connectivity and condition of mature forests in the Appalachians has also changed drastically over the last century, as a result of invasive species, a reduction in natural disturbance regimes, and an increase in urban and energy development. For example, the Cerulean Warbler prefers large forest blocks that include open canopies with a rich understory and midstory. The AMJV partnership is working to improve forest health and restore the landscape to support a full suite of forest species that depend on everything from high elevation spruce-fir habitat to rich, cove forests.