A Truly Extraordinary Effort of the AMJV Partnership

Posted on Monday, October 24th, 2016 by aadmin | Comments Off on A Truly Extraordinary Effort of the AMJV Partnership 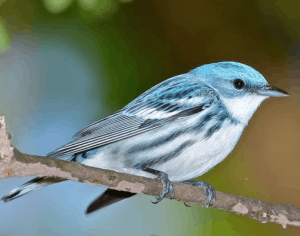 The North American Bird Conservation Initiative’s (NABCI) 2013 State of the Birds Report on Private Lands stresses the importance of landowner assistance programs that promote enhancement and restoration activities in eastern forests. The report goes on to state that for interior forest birds such as the Cerulean Warbler, contiguous areas of viable working forests can serve as buffers against development and ensure long-term population health of the species. On May 5th, 2015, the Appalachian Mountains Joint Venture (AMJV) finalized an agreement with the Natural Resources Conservation Service (NRCS) for our Cerulean Warbler Appalachian Forestland Enhancement Project. Modelled after the successful involvement of many of our partners in the NRCS Working Lands for Wildlife effort for Golden-winged Warblers, this 5-year project, funded through the NRCS Regional Conservation Partnership Program (RCPP), dedicates $8 million of federal funds to Cerulean Warbler conservation efforts on private lands. Over twenty AMJV partners are assisting with this project, contributing an additional $8 million in direct, in-kind, and logistical support, resulting in a truly extraordinary effort by our partnership.

Over the last 50 years, about 70% of the Cerulean Warbler population, or about 1 million birds, have been lost, making them one of the highest priority species of the AMJV. About 80% of the Cerulean Warbler population breeds within the Appalachian Mountains, and approximately 75% of Cerulean Warbler distribution occurs on private lands. It is critical we address the conservation needs of this imperiled bird species on private lands in a coordinated fashion across the core of their range. The Cerulean Warbler Appalachian Forestland Enhancement Project provides that mechanism. The project is divided into two components: one focusing on forest management and the other on legacy surface mine reforestation. The forest management goal is to enhance 12,500 acres of forest habitat in West Virginia, Maryland, and Pennsylvania using sustainable, scientifically based silvicultural practices outlined in the Cerulean Warbler Forest Management Guidelines developed by AMJV partners in 2013. In Pennsylvania, The Nature Conservancy will also place at least 2,000 acres of forest land into easements through their Working Woodlands program. The surface-mine reforestation goal is to restore 1,000 acres of reclaimed mine lands to healthy forest using the Forestry Reclamation Approach (FRA) developed by the Appalachian Regional Reforestation Initiative (ARRI). This restoration will include planting a total of 5,000 potentially blight resistant American Chestnuts called Restoration Chestnuts 1.0, donated by The American Chestnut Foundation.

While enhancing habitat for Cerulean Warblers is the focus of this project, it has a much broader impact and scope across our partnership. It is strengthening and expanding our relatively young but impactful relationship with NRCS, which began with the Golden-winged Warbler Working Lands for Wildlife (WLFW) effort. It also is a foundational element of our JV’s goal to establish a more dynamic forest landscape across the Appalachians. This project, in combination with WLFW and other regional and local efforts by our partners, are the initial steps in a long term investment by the AMJV in our Appalachian forests to promote sustainable and science-based forest management practices, contribute to long term forest health and resiliency, and create habitat for multiple bird and wildlife species.

In the 16 months since the Cerulean Warbler Appalachian Forestland Enhancement Project started, AMJV partners have made tremendous strides in bringing it to life. To provide much needed capacity, American Bird Conservancy hired a project coordinator and two field foresters in Pennsylvania, National Wild Turkey Federation hired a project coordinator in West Virginia, and Green Forests Work hired a coordinator for the surface mine component of this project. This special edition of our AMJV Newsletter highlights the efforts of this team and our partners in making the first year of this project a success and building the foundation to sustainably manage and create Cerulean Warbler habitat on private lands.