American Chestnuts Rise Where Other Trees Failed to Make a Stand

Posted on Tuesday, October 27th, 2015 by aadmin | Comments Off on American Chestnuts Rise Where Other Trees Failed to Make a Stand 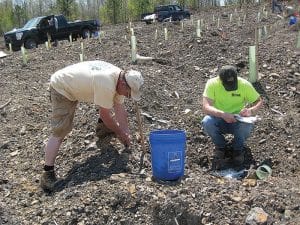 This article was orginally featured in the Bay Journal.

In no place is the optimism of the American chestnut restoration more evident than on the barren slopes of abandoned mines on the tops of Appalachian mountains.

Here, where entire mountain tops have been blasted off and the rubble pushed into valleys, hybrid American chestnuts, including Restoration Chestnut 1.0 trees, are being planted to reclaim the ruined landscape, as well as provide information essential to the widespread re-establishment of a stronger, disease-resistant tree.

Old-timers said that these ridge tops once looked like they were covered in snow during June and July because of all the flowering chestnut trees, according to Michael French, restoration specialist for The American Chestnut Foundation. “When you look at the surface mines today, that’s where most of them are, up high where chestnuts were dominant before the chestnut blight.”

New techniques in reforesting these surface mines may offer one of the best opportunities to reintroduce the hybrid restoration chestnut — an opportunity that is being exploited by The American Chestnut Foundation through multiple projects and partnerships.

The Appalachian Regional Reforestation Initiative, formed in 2004, includes the federal Office of Surface Mining Reclamation and Enforcement, the mining industry, academia and nongovernmental agencies like The American Chestnut Foundation. Together, they have developed the “forest reclamation approach” to healing and restoring the forests and landscapes destroyed by surface mining.

Prior to 1972, surface mine operators had some successes with reforesting mined areas with species like white oaks and loblolly pines, which grew surprising well. But there were problems.

The “shoot and shove” method of mining — breaking open the surface with explosives, then bulldozing the mined rubble into valleys —ruined local waterways and rendered slopes so unstable that young trees could not keep up with erosion.

After this disaster, the U.S. Congress passed the Surface Mining Control and Reclamation Act in 1977, which requires coal companies to post bonds, clean up abandoned mines, and restore and stabilize active mine sites.

Under the act, standardized mine reclamation techniques required mining companies to reshape the land to original contours using techniques that ensured slope stability and reduced runoff — but also resulted in heavily compacted soils, which made reforestation difficult.

“It’s like planting in a parking lot, and a grassy parking lot on top of that,” French said. And because a lot of the tree plantings failed, mining companies turned to grasses and legumes, a quicker way to achieve stability and get their bond money returned.

There are now close to a million acres of reclaimed mine lands that are so compacted that natural succession is arrested. These are magnets for invasive species like autumn olive, tree of heaven and honeysuckle. “When these created grasslands are left unmanaged, they often convert into reservoirs for invasive exotic species,” French said.

But the forest reclamation approach pioneered by the Appalachian Regional Reforestation Initiative has proved to be an effective alternative. Operators use methods to limit soil compaction and leave 4–6 feet of loose planting materials on the surface, where a tree-compatible seed mix is planted — one that will not outcompete planted tree seedlings. The result is an ecologically diverse mix of hardwood trees and shrubs that support wildlife — and can provide commercial value. Plus, the loose mine spoils offer the perfect laboratory for reintroducing the hybrid American chestnuts.

As a partner in the Appalachian initiative, the chestnut foundation in 2008 planted 4,500 hybrid chestnut seedlings on mine lands in six states — including some in the Bay watershed. It found the trees did surprisingly well. This is, in part, because the reclaimed mine soils have a similar composition to the higher elevation and ridges that chestnuts once dominated. And mine spoils may be less conducive to the growth of microbial soil pathogens like Phytophthora, a microscopic, fungus-like organism that causes root sand stems of plants to decay. That pathogen has complicated American chestnut restoration efforts in southern and Piedmont areas.

After this success, the foundation planted nearly 300,000 seedlings from 2012–14 on 12 reclaimed mine sites in Pennsylvania, Ohio, Kentucky, West Virginia and Virginia. The seedlings included 13,000 blight-resistant American chestnuts. Funded in part by a Conservation Innovation Grant from the Natural Resources Conservation Service, this is the largest planting of the hybrid chestnut in the foundation’s history and offers a chance to see how the hybrid chestnut fares in settings less pampered than the foundation’s state breeding and seed orchards.

Planting techniques explored at these demonstration sites will yield important information about how “founder populations” of the restoration chestnut might be used to spread the disease-resistant hybrid in mature forests.

In 2011, the Chesapeake Bay Program’s Forest Restoration Strategy provided an analysis of the nonforested mine reclamation lands in the Bay watershed. Of the 70,000 mine land acres in Maryland, Pennsylvania and West Virginia, more than a third (25,000) were unforested. Counties having the greatest opportunities for mine land restoration included Clearfield, Schulkyill, Luzerne and Dauphin in Pennsylvania; Grant, Jefferson and Mineral in West Virginia; and Garrett and Alleghany in Maryland.

At the Flight 93 National Memorial in Stonycreek Township, PA, the Flight 93 Memorial Reforestation project has brought together more than 2,800 volunteers over the last four years to plant a mixed-hardwood forest that will ultimately cover 100 acres and include disease-resistant (“back-cross”) American chestnut seedlings

In April 2015, Lisa Thomson participated in planting days for the first time since she became CEO of The American Chestnut Foundation. “It was a very moving experience. Year after year, people come, including the families of some of the victims,” she said. “It is such a positive thing in the wake of such a tragedy.”

The foundation has also embarked on another regional partnership with the NRCS, American Bird Conservancy and Green Forests Work, a nonprofit jobs program aimed at creating jobs associated with the reforestation of Appalachian mine lands. The project will restore 12,500 acres of forest, plus an additional 1,000 acres of mined land reforestation — many in the Bay watershed — to the forest habitats favored by the golden wing and cerulean warblers.

“We’re taking the lessons learned in our previous reforestation projects,” said Michael French, whose time is split between the chestnut foundation and Green Forests Work. “It’s a continuous learning process.”

Planting trees, whether ceremonially or as part of a more large-scale restoration, has always been a way to offer something to future generations. The Appalachian Regional Reforestation Initiative, Green Forests Work and The American Chestnut Foundation have planted nearly 1.6 million trees on 2,602 acres of mine lands since 2009. Mine reclamation has provided the chestnut foundation with a way to marry healing the land with the reintroduction of the American chestnut.