Posted on Tuesday, January 26th, 2016 by aadmin | Comments Off on AMJV Board Selects New Chair and Vice Chair to Lead Partnership 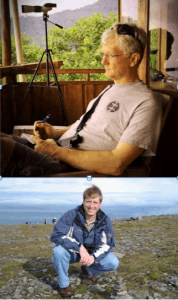 At the Fall AMJV Management Board Meeting, Dan Brauning with the Pennsylvania Game Commission and Mike Burger of Audubon New York were unanimously voted as new Chair and Vice Chair respectively. They will take over leadership duties from David Whitehurst of the Virginia Department of Game and Inland Fisheries and Paul Johansen of the West Virginia Division of Natural Resources, who have admirably guided the AMJV since its foundation and were instrumental in building the successful partnership we have today. Dan Brauning has been an integral part of the AMJV Management Board since 2008. He currently juggles the multi-faceted issues of bird and mammal research and management as Chief of the Wildlife Diversity Program with the Pennsylvania Game Commission. Mike Burger has provided his expertise and insight to the Management Board since 2013. He functions as Audubon’s New York State program chief scientist, with the responsibility of providing a science-based foundation for the organization’s programs. Learn more about the AMJV’s new Chair and Vice Chair.

Dan Brauning joined the Pennsylvania Game Commission as the Ornithologist in 1990, where he now juggles the multi-faceted issues of bird and mammal research and management as Chief of the Wildlife Diversity Program. These duties include setting budgets, coordinating research and communicating results, directing top-notch staff, and promoting all ‘non-game’ issues. He serves as agency representative of many state and regional boards and was Project Director of the 2nd Pennsylvania Breeding Bird Atlas Project (2004-2008), and co-editor, with Dr. Andy Wilson and Robert Mulvihill, of the resulting book. He received a BS in Biology from Geneva College, Beaver Falls, PA in 1979 and then went on to receive a MS from the Interdisciplinary Program in Ecology, at the Pennsylvania State University (1982). Dan was editor of the Atlas of the Breeding Birds in Pennsylvania (1992) and he co-authored The Birds of Pennsylvania.

Mike Burger has been with Audubon’s New York State program since 1999, first as a forest ecologist conducting research in the Adirondacks, then as Director of Bird Conservation for seven years, and most recently as Director of Conservation and Science. Based at the Cornell Lab of Ornithology in Ithaca, Mike functions as Audubon New York’s chief scientist, with a responsibility of providing a science-based foundation for the organization’s programs. Mike’s department implements several of Audubon New York’s conservation efforts, including the forest, young forest, and grassland stewardship programs, the Important Bird Areas program, and the coastal bird conservation program. Additionally, Mike helps coordinate Audubon’s work in the Atlantic Flyway, a framework for increased collaboration and conservation effectiveness from Maine to Central and South America. Prior to coming to Audubon, Mike earned M.S. and Ph.D. degrees at the University of Michigan where he studied climatic and physiological determinants of bird ranges and was supported by a Department of Energy Global Change Fellowship.

Dan will serve a 2-year term as Chair, at the end of which Mike will transition to the AMJV Chair, and elections will be held for a new Vice Chair.