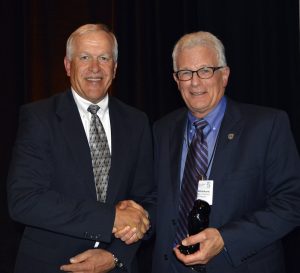 David Whitehurst, Chairman of the Appalachian Mountains Joint Venture (AMJV) and Director of the Bureau of Wildlife Resources at the Virginia Department of Game and Inland Fisheries has been awarded the Seth Gordon Award at the Association of Fish and Wildlife Agencies’ (AFWA) 103rd Annual Meeting held September 10th in Portland, Oregon.

The Seth Gordon Award is AFWA’s highest honor. Established in 1970, it is given to recognize the lifetime achievements of natural resource administrators who have worked steadfastly and effectively towards the ‘best use’ of North American natural resources, and to honor an individual for his/her outstanding career in fish and wildlife conservation.

“It’s a great honor for the Department to see David recognized by the country’s leading wildlife professionals for his years of hard work and his passion for protecting and conserving Virginia’s rich wildlife and natural resources,” said VDGIF Executive Director, Bob Duncan. “David’s contributions to fish and wildlife management have made a huge impact on the lives of everyone who cherish the outdoors and on the thousands of species of animals that thrive in the Commonwealth.”

A North Carolina native, Whitehurst received his B.S. and M.S. degrees from North Carolina State University. During his 38-year career at the VDGIF, David Whitehurst has been instrumental in bringing science-based management to the Commonwealth’s fisheries and wildlife conservation programs. His numerous conservation achievements include: restoring and enhancing the striped bass programs at Kerr Reservoir and Smith Mountain Lake, which provide excellent public fishing opportunities; driving the acquisition of the Department’s Stewarts Creek Wildlife Management Area; establishing the 845-acre Briery Creek Lake, a premier largemouth bass fishery; taking a leading role in efforts to restore waterways for anadromous fish, including the breaching of the Embrey Dam on the Rappahannock River; establishing a fishway on Bosher’s Dam on the James which opened hundreds of miles of river to spawning fish; establishing the Virginia Master Naturalist Program; developing the Virginia Birding and Wildlife Trail, which provides wildlife viewing opportunities while bringing in millions in tourism dollars to the communities through which trail loops run; developing the Virginia Wildlife Action Plan, a comprehensive plan which documents species of greatest conservation need in Virginia; and establishing the Aquatic Wildlife Conservation Center to propagate and recover endangered aquatic species.

Along with his work in Virginia, Whitehurst has played a leading role in conserving natural resources and wildlife across the Appalachians. He is the current Chairman of the AMJV – a regional partnership among federal agenices, states, ngos, and universities working to ensure the long-term sustainability of native bird populations that breed in the Appalachian Mountains – and Chair of the Appalachian LCC – an applied science and management partnership working to protect natural lands, valued resources and the biological diversity that provide environmental benefits and services to the human communities across the region. In these positions, Whitehurst has helped to guide both partnerships in tackling some of the major environmental issues impacting the region that has led to considerable benefits for both people and wildlife.

He is also the recipient of a number of awards and honors, including the River Conservationist of the Year award from the Virginia Wildlife Federation and the Conservationist of the Year award from Trout Unlimited in 1993. In 1997, he was recognized by WWBT TV in Richmond for his efforts to restore anadromous fish populations in the James River, and in 1999 he received the Professional Service Award from the Virginia Chapter of the American Fisheries Society. The Virginia Society of Ornithology recognized his contributions to bird conservation and the development of the Virginia Birding and Wildlife Trail in 2002. In 2004, he received the Coastal America Partnership Award from President Bush for his efforts as a team leader in a multi-organization project to remove Embrey Dam from the Rappahannock River. In 2005, he received the Dr. Henry S. Mosby Award from the Virginia Chapter of The Wildlife Society for outstanding contributions to the wise management of Virginia’s wildlife resources; and he was given a Special Recognition Award from Watchable Wildlife, Inc., for the establishment of the Virginia Birding and Wildlife Trail. In 2012, Whitehurst was the recipient of the Clarence W. Watson Award, bestowed by the Southeastern Association of Fish and Wildlife Agencies for career achievement in fish and wildlife conservation.

Article produced by the Virginia Department of Game and Inland Fisheries.