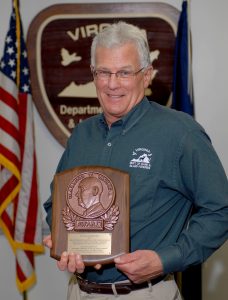 David Whitehurst, Chairman of the Appalachian Mountains Joint Venture (AMJV) and Director of the Bureau of Wildlife Resources at the Virginia Department of Game and Inland Fisheries (DGIF), received the Clarence W. Watson Award for his tremendous, sustained service to resource conservation. This is the most prestigious conservation honor given in the southeastern U.S. and recognizes the individual who has made the greatest contribution to wildlife or fish conservation. It was presented at the 66th Annual Conference of the Southeastern Association of Fish and Wildlife Agencies held in Hot Springs, Arkansas from Oct. 7-10, 2012.

Whitehurst has 40 years of experience as a fish and wildlife biologist, spending the last 38 years in the Commonwealth of Virginia. During this time, he was instrumental in bringing science-based management to the Commonwealth’s fisheries and wildlife conservation programs. In his four decades in resource conservation Whitehurst has conducted groundbreaking research on striped bass, directed the nationally lauded effort that was the first in the U.S. to successfully remove invasive zebra mussels from a state, developed the Virginia Birding and Wildlife Trail that provides wildlife viewing opportunities while bringing in millions in tourism dollars, helped to establish the Virginia Master Naturalist program, and has been instrumental in many other significant conservation initiatives.

Whitehurst began his career as a district fisheries biologist.  He has since served numerous roles for the Commonwealth’s conservation programs including Director of Planning, Policy, and Public Relations and Director of the Wildlife Diversity Division. Along with his current duties at DGIF and the AMJV, Whitehurst also serves as the Chair of the Appalachian Landscape Conservation Cooperative Steering Committee, a science and management partnership working to protect natural lands, valued resources, and biological diversity across the region.

The Clarence W. Watson Award is presented jointly by the Southern Division of the American Fisheries Society, the Southeastern Section of The Wildlife Society, and the Southeastern Association of Fish and Wildlife Agencies. It is named in honor of C. W. Watson, a former Federal Aid Coordinator for the U.S. Fish and Wildlife Service. Watson was influential in implementing the Pittman-Robertson Act that provids federal aid for wildlife restoration activities conducty by state agencies and the Dingell-Johnson Act that provides federal aid to states for sport fisheries restoration.