Posted on Wednesday, May 1st, 2013 by aadmin | Comments Off on AMJV Partner Awarded USFWS Grant to Protect Golden-winged Warbler Habitat 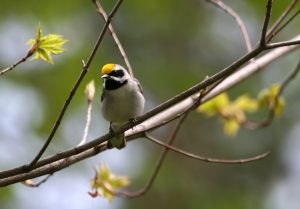 Migratory birds throughout the Western Hemisphere received a boost this week when U.S. Fish and Wildlife Service Director Dan Ashe approved $3.5 million in grants for 27 collaborative conservation projects across the Americas. One such grant is providing $200,000 to the Southern Appalachian Highlands Conservancy to protect 600 acres within the Roan Massif Nationally Significant Natural Heritage Area. Grant funds will be used to protect the Grassy Ridge Bald Property, key habitat for migratory birds including the golden-winged warbler. The area is adjacent to a 24,000-acre network of high-elevation protected land. Protection of this tract will form a critical wildlife corridor of diverse habitats connecting the Roan Mountain Massif to the Yellow Mountain State Natural Area.

These Neotropical Migratory Bird Conservation Act grants will leverage a 3.5-to-1 return for conservation, matching the Service’s investment with about $12.5 million in private funds.  The projects will conserve more than 250,000 acres of migratory bird habitat, stimulate critical research into declining bird populations, and fund outreach programs to raise local awareness of conservation issues and solutions.

More than 350 species of Neotropical migratory birds migrate to and from the United States each year, including warblers, plovers, sandpipers, terns, hawks, flycatchers and sparrows. The populations of many of these birds are in decline, and several species are currently considered endangered or threatened as a result of habitat loss, pollution or climate change.

“Birds provide millions of Americans with enjoyment and a real connection to nature. They also pollinate our crops and protect them from pests, and generate $11 billion in local, state and federal tax revenues each year through the birdwatching industry,” said Ashe.  “But while we may think of
them as ‘our’ birds, they actually only spend part of each year in the U.S., and so to conserve them, we must work internationally with partners to protect their habitats and reduce threats across the Americas. This is what makes the Neotropical Migratory Bird Conservation Act so unique, important and effective; it funds collaborative conservation projects throughout these birds’ breeding and winter ranges.”

Grants and matching funds received through the Act will support public-private partnerships to conserve Neotropical migratory birds and their habitats throughout their migratory ranges, from their breeding sites in Canada and the United States, to their wintering sites in Mexico, Central America, South America and the Caribbean. This year’s grants will benefit hundreds of species in 15 countries.  Other project highlights include:

Seven projects are funded under a pilot program started in 2012, designed to focus resources on a group of particularly threatened birds. By making a long-term investment in priority species and monitoring population improvements, these projects will allow the Service to learn, adapt and be strategic in how we manage conservation funding.  A pilot program highlight from this round:

“The Neotropical Migratory Bird Conservation Act conserves Neotropical migrants for the benefit of people throughout the Americas,” said Jerome Ford, Fish and Wildlife Service Assistant Director for Migratory Birds. “By investing in priority species, key habitats, and successful conservation actions, we achieve the highest impact for each grant dollar invested and make a real difference for birds.”

The Neotropical Migratory Bird Conservation Act of 2000 established the matching grants program to fund projects to conserve Neotropical migratory birds in the United States, Canada, Latin America and the Caribbean. Funds may be used to protect, research, monitor and manage bird populations and habitat, as well as to conduct law enforcement and community outreach and education. The Act requires a partner-to-grant dollar match of 3-to-1, but has achieved a ratio closer to 4-to-1.  For more information on funded projects for 2013 and previous years, visit:
http://www.fws.gov/birdhabitat/Grants/NMBCA/

This release was produced by the U.S. Fish and Wildlife Service.