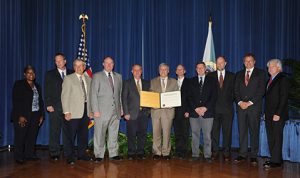 The Appalachian Regional Reforestation Initiative (ARRI) was a recipient of the 2012 “Partners in Conservation” Award presented by the Deputy Secretary of the Interior David J. Hayes at a ceremony in Washington D.C. on October 18, 2012.  The award recognized 17 organizations that have achieved exemplary conservation results through public-private cooperation and community engagements.

“The Partners in Conservation Awards offer wonderful examples of how America’s greatest conservation legacies are created when communities from a wide range of backgrounds work together,” said Hayes. “These awards recognize dedicated citizens from across our nation who collaborate to conserve and restore America’s Great Outdoors, to encourage youth involvement in conservation and to forge solutions to complex natural resource challenges.”

ARRI is a coalition drawing from citizens, the coal industry, and government dedicated to restoring forests on coal-mined lands in the Eastern United States.  Restoration of habitat on these degraded lands provides essential breeding and foraging grounds for AMJV priority bird species and other wildlife.

The Office of Surface Mining Reclamation and Enforcement established ARRI in order to plant more hardwood trees on previously mined lands in Appalachia and expedite the establishment of forest habitat through natural succession. Since then, the initiative has had direct, positive, and measurable impacts on the environment.  More than 1,000 individuals representing 207 diverse organizations contribute to the initiative’s goals and surface mining stakeholders have planted approximately 78 million trees on nearly 115,00 acres of mined land throughout Appalachia.

The “Partners in Conservation” annual award ceremony is an opportunity for the Interior Department to recognize conservation achievements that include collaborative activity among a diverse range of entities, including federal, state, local and tribal governments, and individuals.

Portions of this press release were produced by the Department of the Interior.