Posted on Tuesday, August 5th, 2014 by aadmin | Comments Off on AMJV Partnership Successes for Song Birds and Game Species 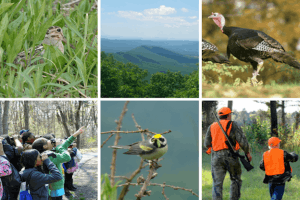 The benefits from managing habitat for game species and managing habitat for songbirds are not mutually exclusive. Creating and enhancing a variety of habitats supports a diversity of wildlife and activities, from birdwatching to hunting. This is because habitats used by migratory songbirds are also home to turkey, quail, deer and other wildlife. An example is the Golden-winged Warbler, a birdwatcher’s bucket-list species and one of the fasting declining birds in North America. It requires patchy shrublands and forest edges, which are also prime real estate for American Woodcock, Ruffed Grouse, and Wild Turkey.

By protecting and managing for such habitat, both hunters and birdwatchers benefit. It makes sense they should reap the rewards, for hunters, birdwatchers, and nature enthusiasts have worked as vital contributors to conservation for decades. Each is a major investor in America’s wildlife and landscapes by paying for licenses, fees, stamps, and programs, as well as supporting organizations and policies that enhance natural resources. Such support over the years has improved conservation outcomes immensely and led to huge rebounds in populations for notable birds. Several species of ducks faced near-extinction in 1900 but now are part of a waterfowl population numbering over 44 million today. Wild Turkeys have grown from a population of 100,000 at the turn of the 20th century to 7,000,000 today.

The Appalachian Mountains Joint Venture brings together organizations focusing on the sustainability of songbirds, game species, and natural resources to prioritize and coordinate management activities for efficient, effective bird conservation. Read about our partners’ accomplishments in the Appalachians that are benefitting both song and game birds and leading to a greater variety of habitats for a diversity of wildlife, people, and activities.

Young Forest Project Supports Wildlife Through Stewardship and Science
The Wildlife Management Institute’s Young Forest Initiative encourages and coordinates the activities of partners to create healthy, productive tracts of young forest to reverse the population declines of 65 wild creatures classified as “species of greatest conservation need”. Harvesting timber, planting of native shrubs and trees, controlled burning, and other management techniques are employed to improve habitat for wildlife that need dense young forests. They include American Woodcock, Golden-winged Warblers, Whip-poor-wills, Bobcats, Cottontail Rabbits, and Wood Turtles. The partnership is coordinating outreach through events and meetings to inform the public, government officials, local conservation groups, and the forestry community about the importance of supporting harvesting techniques that create and maintain young forests to preserve the nation’s wildlife heritage.

Best Management Practices Provide Habitat Guidelines for American Woodcock
In 2008, the Appalachian Mountains Woodcock Initiative -a collaboration of 10 wildlife conservation entities dedicated to improving conditions for American Woodcock and other young forest species – published Best Management Practice (BMP) guidelines for this species in the Central Appalachians. The guidelines provide information to foresters, resource managers, and the conservation community on habitat needs and goals for the American Woodcock, conservation planning objectives, and lists other species that would benefit from habitat management for young forests. Where habitat has been managed so far, some populations have increased significantly. Young forest habitat created using Golden-winged Warbler BMP guidelines can also provide excellent Woodcock habitat. The Golden-winged Warbler BMP has been especially effective for creating improved habitat conditions when both species are present in an area.

Successful Implementation of Golden-winged Warbler Habitat on Pennsylvania’s Public and Private Lands
The Pennsylvania Golden-winged Warbler Habitat Initiative is working to create quality young forest habitat for breeding Golden-winged Warblers and associated wildlife throughout Pennsylvania.  Since the start of the Initiative in 2011, this partnership’s efforts have resulted in the creation and enrollment of 27,971 acres of potential Golden-winged warbler breeding habitat on private (7,645 acres) and public (20,326 acres) lands. In 2013, the National Wild Turkey Federation and Pheasants Forever joined the Initiative and committed field staff to assist with conservation planning and implementation on private lands.  The valuable contribution by these two partner organizations, traditionally not associated with songbirds, provides evidence of the well-known recognition that high quality Golden-winged Warbler breeding habitat also provides valuable habitat for many other game and non-game species.

Public-Private Partnership to Improve Songbird and Game Bird Habitat in 16 States
The National Wild Turkey Federation (NWTF) and the USDA’s Natural Resources Conservation Service (NRCS) are partnering on two initiatives to enhance critical ecosystems on private lands across the Appalachians and beyond. The Golden-winged Warbler and Longleaf Pine Initiatives are improving habitat on private land for targeted species and countless other wildlife and plant species that flourish in the same habitat. Through these free public-private initiatives, the NWTF are working with 725 private landowners to help improve habitat on their land by providing technical assistance and preparing management plans. These efforts provide expert guidance and help landowners participate in existing federal cost share programs to help fund critical habitat improvements. NWTF and partners are contributing $1.75 million to these initiatives to complement NRCS’s investment.

RGS Expands Habitat Effort with Creation of American Woodcock Society
The Ruffed Grouse Society (RGS) launched the American Woodcock Society (AWS), a branch of RGS initiated to expand forest habitat efforts and upland hunting opportunities to new landscapes across the nation. While grouse and woodcock share similar habitats, they don’t coexist across all landscapes. AWS will advance forest management and outreach to states that may not have grouse populations, especially in the southern United States where the majority of woodcock spend the winter months. Enhancing habitat for grouse and woodcock in these regions also benefits many songbirds and other wildlife that rely upon young forest habitats. In addition, these regions continue to have a strong bird-hunting culture, and the habitat created by RGS/AWS will strengthen and expand these sporting traditions.

New Partnership to Help Restore Bobwhite Quail
A ground-breaking memorandum of understanding signed between the National Wild Turkey Federation and the National Bobwhite Conservation Initiative is helping to restore bobwhite quail populations. The partnership combines a network of quail enthusiasts with proven track records of restoring and enhancing upland habitat. Efforts are taking place on projects within focal areas that address the most critical conservation needs of both wild turkeys and bobwhite quail. These areas are being developed on regional, state and local levels and utilize cutting edge geospatial technology and existing partnerships to identify and implement critical habitat projects.