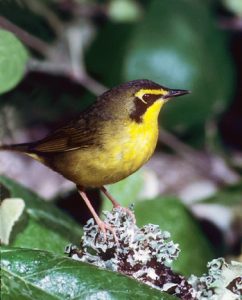 The Appalachian Regional Reforestation Initiative (ARRI), a coalition of federal and local agencies, organizations, citizens, and companies dedicated to restoring forests on coal mined lands in the Eastern United States, was honored in the first Presidential Migratory Bird Stewardship Award, which was announced by Interior Secretary Ken Salazar on May 25, 2011.

The award is designed to promote efforts and partnerships in federal agencies that lead to better migratory bird conservation. This first award was presented to the Interior Department’s Office of Surface Mining (OSM), which coordinates the ARRI initiative with major contributions from a variety of groups including American Bird Conservancy (ABC), the Appalachian Mountains Joint Venture (AMJV), the Cerulean Warbler Technical Group (CWTG), the Golden-Winged Warbler Working Group, the National Fish and Wildlife Foundation, The Trust for Wildlife, and many other conservation and environmental groups and associations.

Created by OSM in 2004, ARRI focuses on restoring native hardwood forests on areas where surface coal mining has occurred or is currently ongoing. These areas include the Appalachian breeding ranges of many species of neotropical migratory songbirds, notably the Cerulean Warbler, which depends on intact interior forests.

The Council for the Conservation of Migratory Birds, led by the U.S. Fish and Wildlife Service (FWS) and composed of other federal agencies with migratory bird responsibilities, selected the winner of the award. The award was presented to OSM by FWS Deputy Director Dan Ashe at the national celebration of International Migratory Bird Day in Washington, D.C.

Interior Secretary Salazar said, “This project is helping restore forest habitat that is vital for countless neotropical migratory birds and other wildlife while improving the quality of life for many communities in Appalachia. Moreover, this OSM initiative has fostered partnerships that will further the conservation of migratory birds for generations to come.”

ABC’s Brian Smith, who is the AMJV coordinator said: “The accomplishments of this coalition are remarkable – we have planted over 70 million trees on about 103,000 acres of mined land that have or might have been reclaimed to non-native grasslands that is poor-quality habitat for the native birds of the region. We will be seeing dividends from this effort for many generations to come.”

Following the implementation of the Surface Mining Control and Reclamation Act of 1977 (SMCRA), regulators focused on stabilizing the landforms created by mining in lieu of restoring diverse, native forests. Regulators wanted to solve problems such as severe erosion and sedimentation often seen on “pre-SMCRA” surface mines. As a result, excessive soil compaction became common on surface mines, and aggressive grasses and other non-native ground covers were generally planted. There are an estimated 750,000 – 1,000,000 acres that have been reclaimed to grasses and other undesirable vegetation (e.g., autumn olive), contributing to both forest fragmentation and the spread of non-native plants. The ARRI effort is targeting projects to remedy these issues, while also reducing erosion and sedimentation.

Large blocks of core forest are critical to several priority bird species in the Appalachians. For example, the Acadian Flycatcher, Wood Thrush, Cerulean Warbler, Worm-eating Warbler, and Kentucky Warbler rely on the large blocks of deciduous forests for breeding in the Appalachians. The ARRI and AMJV partners are working together to strategically target efforts and resources at sites that would most benefit these species, but that also could benefit high-priority shrubland birds (e.g., Golden-winged Warbler) as the young seedlings begin to grow.

In addition to the reforestation efforts, the Presidential Award also recognized a key South American Partner, Fundación ProAves, for their work with ARRI and CWTG in a pen-pal program that links high school students from the coal fields of the Appalachian Mountains with students in the Andean coffee-growing region of Colombia, South America. Using the conservation of shared migratory birds, such as the Cerulean Warbler, as the uniting principal, the project adds an international education dimension to the on-the-ground work restoring minelands. The program is trying to not only link Cerulean Warbler breeding and wintering grounds, but trying to educate kids in both areas about the linkage of this bird to two global products—coffee and coal, both of which have significant overlap with, and impacts on, Cerulean range.

ARRI is beginning to change the way mineland reclamation will be conducted into the future, and is one of many effective on-the-ground bird conservation efforts underway in the eastern U.S.