Posted on Wednesday, April 9th, 2014 by aadmin | Comments Off on Assembly Passes Bill to Preserve 22,000 Acres of Maryland Wild Areas 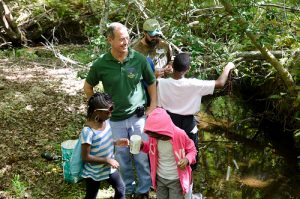 “Maryland’s Wildlands are the last remaining untouched landscapes and waterways of their kind, supporting sensitive ecosystems and many rare and vanishing plants and animals,” said Governor O’Malley, who will sign the legislation into law. “It is our responsibility to preserve these areas today, so there can be no question about how they will be used or developed in the future. The passing of this bill is another significant step forward in securing the health and prosperity of our natural world.”

The last new Wildlands designations ─ made 12 years ago ─ expanded the system to 29 areas in 15 counties, covering 43,779 acres, listed here. Since then, DNR has acquired new properties that meet Wildlands criteria, with additional areas identified upon completion of an Old Growth Forests inventory and mapping of high conservation forests and environmentally sensitive areas on DNR-managed lands.

During 2013, the Department of Natural Resources conducted an extensive public review of an initial proposal, which resulted in some modifications to better accommodate the needs and desires of citizens and stakeholders. The final version of the bill designates new or expanded Wildlands in Allegany, Baltimore, Calvert, Charles, Frederick, Garrett, Montgomery, Somerset and Worcester counties.

“Under this designation, these primitive areas will be forever protected, remaining changeless under the watch of future land managers after our time here has long passed away,” said DNR Secretary Joseph P. Gill.

Wildlands benefit the economy of local communities by attracting birdwatchers, photographers, backpackers and others who enjoy nature. Many Wildlands serve as home to rare and vanishing species such as hellbenders and purple-fringed orchids. Other recreational pursuits like hunting, fishing, trapping, hiking and horseback riding, as well as research, are all permitted within the system.

More than 90 percent of citizens surveyed by the Maryland Greenways Commission said that some parts of Maryland should be left in their natural state forever.

“Ecologists, biologists and geologists say that conservation is needed on a landscape scale to maintain clean water, healthy air and diverse wildlife populations, and build ecosystem resilience to a rapidly changing climate,” said Joel Dunn, Executive Director of the Chesapeake Conservancy. “Efforts like the expansion of the Maryland Wildlands Preservation System and conservation programs such as Program Open Space help make these goals possible, and we commend the Governor and the legislature for their support of this important expansion.”

Article by the Office of Governor Martin O’Malley