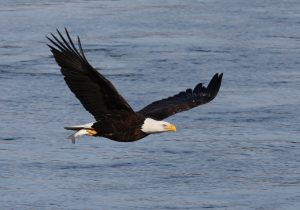 The recovery of our national symbol, the Bald Eagle, is considered one of the greatest conservation successes of the 20th century. The 44 nesting pairs detected in Maryland in 1977 represented an all-
time low for the state. However, as actions were taken to reduce the declines (e.g., banning harmful pesticides like DDT), Bald Eagle populations recovered to the point that they were removed from the federal threatened and endangered species list in 2007. Today, the Chesapeake Bay region is home to the largest concentrations of Bald Eagles in the lower 48 states, with an estimated 400 or more pairs currently breeding in Maryland.

Although organized surveys of Maryland’s Bald Eagle population were discontinued in 2005, the existence of threats such as pollution, increased frequency of violent storms, coastal development, and collapsing fish populations prompts the need for continued monitoring of Bald Eagles in our state. The Maryland Bird Conservation Initiative, a partnership working to conserve birds and their habitats, is launching a new citizen science monitoring program this December, to document the nesting success and productivity of the Maryland Bald Eagle population.

The Bald Eagle nesting season in Maryland starts in October, with pair formation and construction of large stick nests in the upper crotch of tall trees. Eggs are usually laid in February, but pairs in southern parts of Maryland occasionally start laying their eggs in January. The clutch of 1-3 eggs usually hatch by mid April, and the nestlings fledge in May-June. For this effort, volunteers will be asked to visit a nest repeatedly between March and July to collect information on nest occupancy and the number of young. Training will be provided but participants will need their own binoculars or spotting scope. Care will be taken to respect private property and to not disturb the nesting eagles.

To learn more and to register as an official Eagle Nest Monitor, contact Science Coordinator Frode Jacobsen at mdeaglenests@gmail.com.