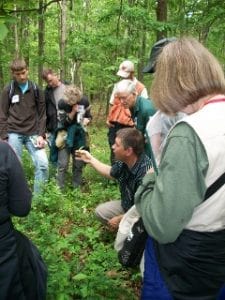 In good news for migratory birds, Sen. Ben Cardin (D-MD) and Sen. Rob Portman (R-OH) have introduced a bipartisan bill, S. 1537, to reauthorize the Neotropical Migratory Bird Conservation Act (NMBCA), one of the nation’s most important bird conservation laws. Now called the Migratory Birds of the Americas Conservation Act, the bill would provide a higher level of funding to help conserve species like Baltimore Oriole, Red Knot, Wood Thrush, and other migratory birds, many of which are in rapid decline. Rep. Robert Wittman (R-VA) and Rep. Ron Kind (D-WI) are expected to introduce companion legislation in the House of Representatives soon.

“This simple legislation reauthorizes a cost-effective, budget-friendly, and highly successful federal program to protect birds, including the Baltimore Oriole, that have seen a steady decline in their populations despite being protected by federal and state laws,” Sen. Cardin said in a statement. “Our goal is to continue to sustain healthy populations of migratory birds that are not only aesthetically beautiful, but also critical to our farmers through consuming billions of harmful insects and rodent pests, pollinating crops, and dispersing seeds.”

American Bird Conservancy (ABC) thanks Senators Cardin and Portman and other supporters of the legislation for their conservation leadership on this critical issue. “This legislation is urgently needed to help the Americas’ diminishing migratory bird populations,” said Jennifer Cipolletti, Program Policy Officer at ABC.

The 2016 State of the Birds Report found over one-third of our songbirds are now in decline or facing serious threats. “Effective conservation projects like those supported by the NMBCA can help us turn that around,” Cipolletti said.

The NMBCA provides a lifeline for bird conservation, encouraging habitat protection, education, research, monitoring, and other work to provide for the long-term protection of neotropical migratory birds. These species breed in the continental United States or Canada and spend the winter in Mexico, Central America, the Caribbean, or South America. Songbirds, land birds, water birds, shorebirds, waterfowl, raptors, and others all benefit from the NMBCA.

The U.S. Fish & Wildlife Service receives many more requests for high-quality conservation projects than it can fund at current maximum authorization levels, set by Congress at $3.9 million per year. Under the new version of the law, that amount could increase to $6.5 million.

Since 2002, NMBCA has supported more than 500 conservation projects in 36 countries, on more than 4.2 million acres of critical bird habitat. “Without the NMBCA, we would be losing habitat for migratory birds such as Golden-winged Warbler at an accelerated and unacceptable rate,” said Andrew Rothman, ABC’s Migratory Bird Program Director.

Sen. Portman gave an example from his home state of Ohio. “Hundreds of bird species migrate through Ohio each year, making Lake Erie one of the most popular destinations for birdwatching,” he said in a statement. “Birding contributes more than $20 million to Ohio’s tourism industry and attracts visitors from across the world each year. I am proud to work with my colleagues on the Migratory Birds of the Americas Conservation Act to protect and conserve these bird populations so that they may be enjoyed by future generations.”

Bird conservation also benefits society in other ways. Birds consume an estimated 98 percent of insect pests that threaten agricultural production. They pollinate many plant species and keep pests like mosquitoes in check.