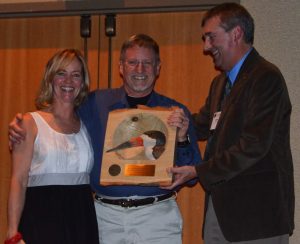 “I congratulate the award winners for their vision, dedication and exceptional commitment in protecting migratory birds,” said U.S. Fish and Wildlife Service (Service) Assistant Director of Migratory Birds Jerome Ford. “Each of these conservation champions has demonstrated exceptional passion for achieving bird conservation on many levels.”

GEORGE ANGHER:  PIF Lifetime Achievement Award – Angher collaborates with diverse organizations and agencies and is involved in publishing The Birds of Panama guide and in critical scientific research about Panama’s important bird areas. He contributes significantly to management, conservation and to the increase in the body of knowledge of Panama’s birds and their habitats. His work has resulted in worldwide recognition of Panama as a country of global significance to migratory birds.

BARBARA BRESSON:  PIF Leadership Award – For more than two decades, Bresson has facilitated partnerships throughout Oregon and Washington on behalf of PIF. She integrates avian conservation programs into federal agency activities, helping ensure PIF priority species are considered in land management plans. In addition to her regional contributions, she now brings her experience to the PIF International Steering Committee.

DAVID BUEHLER:  PIF Investigations Award – Buehler has been essential to the success of the Cerulean Warbler Forest Management Project since 2002. Under his direction, the project has identified how and where forest management can be used to create, restore and enhance cerulean warbler breeding habitat. This knowledge has led to the development of cerulean warbler best management practices that show forest landowners and managers how to manage proactively for these birds.

THOMAS WILL:  PIF Outstanding Contributions to Bird Conservation – Will works in Minnesota as a wildlife biologist for the Service.  He tackles important challenges facing migratory birds, such as the need to better understand anthropogenic causes of bird mortality. His leadership has resulted in diverse partnerships and highlighted the importance of full lifecycle conservation, especially considering the impacts of climate change on birds.

NATIONAL TRUST FOR THE CAYMAN ISLANDS:  PIF Stewardship Award – The trust is the only nongovernmental organization implementing land purchases for biodiversity protection in the Cayman Islands. They have secured all or a large part of four of the Cayman Islands and 10 important bird areas to protect 179 nonbreeding migrant species including the threatened Cuban parrot, Vitelline warbler, white crown pigeon and West Indian whistling duck. Their “10 x 20 Challenge” strives to increase protected lands by 10 percent by 2020.

JENNIE DUBERSTEIN:  PIF Public Awareness Award – Duberstein works in Arizona as the Service’s education and outreach coordinator for the Sonoran Joint Venture. Duberstein’s work in the United States and Mexico brings training and materials to communities, schools and biologists and shares critical bird conservation messages across borders. As chair of the National Joint Ventures Communications/Education/Outreach Team, she developed a strategy that raised the profile of joint ventures among members of Congress.

PIF was launched in 1990 in response to growing concerns about declines in the populations of many land bird species and to emphasize conservation of birds not covered by existing initiatives. The central premise of PIF is that the resources of public and private organizations in North American and South America must be combined, coordinated and increased to achieve success in conserving bird populations in this hemisphere. PIF is a cooperative effort involving partnerships among federal, state and local government agencies, philanthropic foundations, professional organizations, conservation groups, industry, the academic community and private individuals.

Press release developed by the U.S. Fish and Wildlife Service.