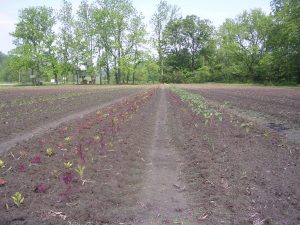 “This funding allocation is unique because of its size, and because it is directed specifically for the protection of important soils as well as clean water sources for our regional watersheds,” said Executive Director Carl Silverstein. “We have successfully used federal funding to accomplish significant farmland conservation projects over the past decade, and this new allocation opens the door for us to work with willing landowners to protect some of the most crucial, large contiguous tracts of farmland remaining in the mountains. This is an incredible success, reflecting well on the perseverance and dedicated, collaborative efforts of the Blue Ridge Forever partners ”

The partnering Blue Ridge Forever land trusts plan to use the federally allocated funding to protect mountain farms from a change in land use through voluntary agricultural conservation easements. Agricultural conservation easements protect farmland and rare prime soils for food security for future generations, while also protecting the cultural heritage, scenic vistas, and farm-to-table establishments that drive tourism to the region. However, the benefits of this new funding will reach much further than the mountains. The nine river basins emanating from the WNC region contain the headwater sources for drinking water for millions of people throughout the Southeastern United States.

“We are thrilled to bring this allocation to Western North Carolina to keep mountain farms farming, and gratified the region is receiving national recognition for its importance as a freshwater source for the Southeast,” said Jessica Laggis, Blue Ridge Forever’s director. “This funding represents the culmination of years of dedication in conservation planning and relationship building. WNC land trusts have been laying the foundation for this RCPP success for a long time.”

In the past, SAHC used the same federal funding source to successfully protect several farms, including the 320-acre Reeves Homeplace Farm in Madison County, the 90-acre Watalula Farm in Leicester, 116 acres of fertile bottomland in Sandy Mush, and 80 acres of bottomland in Fairview in Buncombe County.

“The ability to protect nationally significant prime soils and water quality with the same funding source is a dream come true,” said Farmland Program Director, William Hamilton. “This funding will have a permanent, positive impact on WNC, and will be a gift that keeps on giving for generations to come. It provides us with the opportunity to help preserve some of the biggest and best farms in the region. One of the victories of this funding is that it obligates $8 million to be used exclusively for purchase of agricultural conservation easements in western North Carolina.   In the past we were competing statewide for these same federal funds, and the federal allocation to the entire state of NC ranged between $500,000 – $3.5 million.  So, securing $8 million for western North Carolina changes things in a dramatic way for us.”

Mountain farms are increasingly vulnerable to a change in land use, due in part to extraordinary development pressure and rapidly rising land values. Large mountain farms are particularly scarce because they are prone to fragmentation and development as they pass from one generation to the next, yet they are critically important for clean water because they encompass significant water sources. SAHC hopes to use this funding to continue building on more than a decade of successful farmland conservation.

“NRCS has created a unique opportunity with RCPP that recognizes the power of partnership,” continued Laggis. “Farmland preservation is great cause everyone can get behind; it brings a diverse array of stakeholders together in a beautiful way. We especially want to thank Principal Chief Patrick Lambert of the Eastern Band of Cherokee Indians, Congressman Patrick McHenry, Senator Richard Burr, Governor Pat McCrory, Representative John Ager, and Representative Joe Sam Queen for supporting farmland preservation in Western North Carolina.”