Posted on Thursday, February 23rd, 2017 by aadmin | Comments Off on Cerulean Warbler Partnership Coordinator named NWTF Biologist of the Year 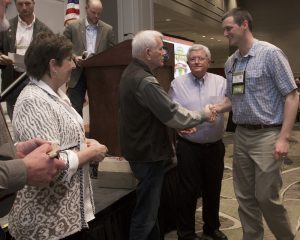 Kyle Aldinger, AMJV and National Wild Turkey Federation’s (NWTF) Cerulean Warbler Partnership Coordinator in West Virginia, was named NWTF Wildlife Biologist of the Year for the Eastern Region. Kyle was given this prestigious award for his valuable contribution to the Cerulean Warbler Appalachian Forestland Enhancement Project, a regional effort to enhance 12,500 acres of forest habitat on private lands in West Virginia, Maryland, and Pennsylvania as well as reforesting 1,000 acres of reclaimed surface-mine sites in Kentucky and Ohio. His and partners’ efforts have raised awareness tremendously – through workshops, news articles and radio and tv spots – about proper forest management practices that can create habitat for Ceruleans and a host of other wildlife. In 2016, public engagement led to great interest from 165 private landowners and established 11 contracts to improve habitat on nearly 500 acres.

The Wildlife Biologist of the Year Award is presented annually to one NWTF wildlife biologist in the eastern region and one in the western region. The award recognizes outstanding contributions toward NWTF’s “Save the Habitat. Save the Hunt.” initiative. NWTF wildlife biologists are assigned to project-specific deliverables that further the conservation goals and objectives of this initiative and may also serve as a project specialist for state and federal partners as well as volunteer leadership.

On day one, Kyle was tasked with building a program from the ground up in collaboration with the Natural Resources Conservation Service and other federal, state, and NGO partners. He made it a priority to inform NWTF volunteers and members about his role as well as how the program designed to improve forest conditions for a non-game bird species in peril would significantly benefit wild turkeys and the NWTF mission. Kyle and a host of partners collaborated with private landowners to engage them on the importance of forest management and opportunities to secure technical and financial assistance to get the work done.

Before joining the AMJV and NWTF, Kyle earned his B.S. degree in Environmental Studies; Fisheries and Wildlife Biology from California University of Pennsylvania in May 2007 and subsequently completed his M.S. degree in Wildlife and Fisheries Resources from West Virginia University (WVU) in 2010. Kyle studied ecology, management, and survey methodology of Golden-winged warblers, which have habitat needs that parallel Cerulean warblers. In addition, Kyle began pursuit of his Ph.D. in Forest Resource Science: Wildlife and Fisheries Resources at WVU in 2010 for which his research involved studying ecology and management of Golden-winged warblers and associated species.