Cerulean Warbler to Benefit from Acquisition of Key Colombian Habitat

Posted on Wednesday, January 23rd, 2013 by aadmin | Comments Off on Cerulean Warbler to Benefit from Acquisition of Key Colombian Habitat 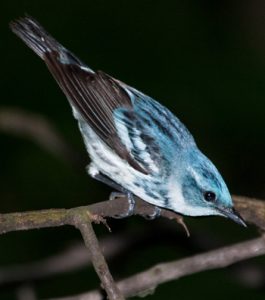 The Cerulean Warbler, a bird whose population has declined by about 70 percent in the last 40 years, and 25 other neotropical migrating birds are the key beneficiaries of a successful two-year-effort by American Bird Conservancy (ABC) and Fundación ProAves to purchase and protect key wintering habitat for the birds in Colombia, South America.

The conservation effort resulted in the acquisition of nine new properties. Those new properties now make up the western flank of the Pauxi Pauxi Reserve that was established in 2007 by the same partner groups and now totals about 4,470 acres. The purchased area is located in north central Colombia, approximately 150 miles north of Bogota in an area of lush tropical vegetation. The newly acquired land is part of an imposing, mountainous outcropping called Cerro de la Paz, along the Magdalena River Valley west of the Andes Mountains, an area that has been heavily deforested due to agricultural and urban expansion.

“As migratory birds head south through the degraded river valley, the Pauxi Pauxi Reserve is a forested haven. We are thrilled to expand available habitat for these weary avian travelers,” said David Younkman, Vice President for Conservation at ABC.

“Cerro de la Paz and the Pauxi Pauxi Reserve is one of the best migrant hotspots in Colombia based on our surveys,” said Alonso Quevedo, Executive Director of ProAves. “It is fantastic that our conservation efforts to protect endangered resident species, such as the Helmeted Curassow, can also ensure vital winter habitat for dozens of migratory species.”

The Cerulean Warbler was formerly one of the most abundant breeding warblers in the Ohio and Mississippi River Valleys and elsewhere in the U.S., but is now one of the country’s most imperiled migrant songbirds.

Overall, Cerulean Warbler numbers have plummeted by almost 70% since 1966. This elusive bird winters in the Andes and intermountain valleys, breeds from the Great Lakes region to Georgia, and west from Wisconsin to Louisiana, with particular concentrations in the Appalachians and Central Hardwoods region. Both its breeding and wintering habitat are being lost.

In addition to providing habitat for the Cerulean Warbler, these properties represent a crucial area of wintering habitat for numerous other wintering migrants such as Tennessee, Black-and-white, Mourning, Canada, Blackburnian, and Black-throated Blue Warblers, American Redstart, Northern Waterthrush, and Rose-breasted Grosbeak. The Critically Endangered Blue-billed Curassow and Endangered Helmeted Curassow are also reported from this area in recent years, although confirmation is pending.

The Pauxi Pauxi Reserve also provides another strategic function – it anchors the northern end of the Cerulean Warbler Corridor in Colombia. This area is seeing increased agricultural expansion and ProAves is assisting local farmers in reducing deforestation by promoting shade coffee and cacao, both which benefit migratory birds. ProAves owns and operates small coffee and cacao farms that demonstrate to neighboring farmers ways to enhance wildlife conservation and maximize profits.

Current conservation efforts include reforesting habitat by building a tree nursery. Local residents have been hired to help find seeds, maintain saplings, and will begin planting by mid-2013. To protect the area from logging and unauthorized farming, a guard has been hired, and an existing structure is being renovated to serve as a guardhouse. Two small cacao farms on the property will provide ongoing income to sustain management efforts. Camera traps are being installed to confirm the presence of Helmeted, and possibly Blue-billed, Curassow among other important wildlife. ProAves and American Bird Conservancy have been able to undertake this work, including the new land purchases, with the generous support of the U.S. Fish and Wildlife Neotropical Migratory Conservation Act program, Southern Wings, the Northeast Association of Fish and Wildlife Agencies, Amos Butler Audubon, the Robert W. Wilson Charitable Trust, Jeff and Connie Woodman, David and Patricia Davidson, Elisha Mitchell Audubon Society, and many other supporters of Colombian bird conservation.

This region faces other threats as well: an enormous hydroelectric dam on the Sogamoso River is underway which will flood a large tract of forest, and the developer is buying land and relocating families upslope.  This will bring increased pressure on the reserve’s buffer zone and drive wildlife into the refuge, making the protected habitat even more important.

This article was produced by the American Bird Conservancy.