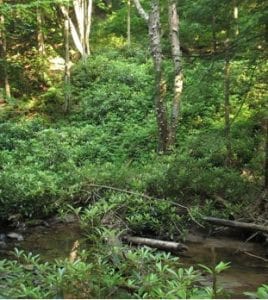 This article originally appeared in the Fall 2014 Edition of the All-bird Bulletin.

Armed with field maps and GPS’s, a band of volunteers stalked the grounds of Savage River State Forest in northwest Maryland to observe and survey some of the state’s most at-risk bird species. Over a two-year period, 14 volunteers assisted Audubon Maryland-DC in a Bird Blitz, a short, rapid, citizen science-based survey that seeks to locate birds such as Cerulean Warbler, Golden-winged Warbler, and Wood Thrush off the beaten path. The observational data collected is being used to document the importance of areas in and around the State Forest to at-risk birds to support designation as an Important Bird Area (IBA)—high priority habitat where Audubon and other partners focus bird conservation action.

Blitzes come in all forms. Some Blitzes seek out amphibians, others butterflies. Some can last over a period of weeks, others are conducted in a 24-hour span. For nearly a decade, Audubon Maryland DC has harnessed the power of volunteers through Bird Blitzes for help in surveying a variety of habitats around the state to understand where key populations of atrisk birds occur during the breeding season. Since 2006, nearly 100 volunteers have conducted Blitzes resulting in the identification of 20 new IBAs in the state of Maryland.

“A Bird Blitz is an effective way to document IBAs because it uses a field method accessible to volunteer birders with little or no scientific training,” said David Curson, Audubon Maryland-DC’s Director of Bird Conservation. “This is possible because the criteria for identifying IBAs do not require accurate population estimates but rather good evidence that the population of at-risk birds exceeds a certain numerical threshold.”

Site-specific population data were largely missing for at-risk species in the rolling hills and mountains of northwest Maryland. Savage River State Forest makes up a critical part of this region. Comprising 54,000 acres, Savage River is the state’s largest forest—providing diverse habitat, preserving a strategic watershed, and offering abundant recreational opportunities. That this large expanse housed at-risk birds was likely, but evidence was needed.

Leading up to the Bird Blitz, Audubon staff mapped out the routes volunteers would take throughout the forest in order to sample all suitable habitats for the at-risk birds they were hoping to sample. Each route could be covered in a 3 to 4 hour period and would place volunteers within 250 meters of most of the habitats likely to hold target bird species. Volunteers were on the lookout for at-risk species such as Alder Flycatcher, Blackburnian Warbler, Canada Warbler, Cerulean Warbler, Eastern Whippoor- will, Golden-winged Warbler, Kentucky Warbler, Mourning Warbler, Red-headed Woodpecker, and Wood Thrush.

Equipped with the pre-loaded hiking routes on their GPS, volunteers hiked, listened, observed, and finally entered the location of all IBA trigger species into the GPS. During the Savage River Blitz, volunteers completed 28 surveys covering close to 160 kilometers of transects. Count totals included 120 Wood Thrush, 68 Canada Warblers, 32 Worm-eating Warblers, and 15 Cerulean Warblers. Field data were then compiled to generate spatial maps for use in the IBA designation process.

Areas with an IBA designation are critical for land use advocacy and for helping bird conservation partners and regional partnerships like Migratory Bird Joint Ventures prioritize habitat management actions to deliver cost-efficient and effective conservation across the landscape.

“A critical component of our Joint Venture work is conservation design – understanding where on the landscape we need to focus our work and resources, and why that area is important,” said Appalachian Mountains Joint Venture Coordinator Todd Fearer. “Audubon’s IBA program is an important resource for providing our JV partners with that information. Plus, their citizen science approach is an excellent way to involve the general public and increase awareness about bird conservation efforts in the region.”

The IBA nomination package for Savage River is currently under review, with the designation decision to be made later this year. Meanwhile, Audubon Maryland-DC is looking to expand its IBA program to engage people in the monitoring, advocacy, and stewardship of these critical sites.

Thanks to the Maryland Department of Natural Resources for the State Wildlife Grant that supported Bird Blitz efforts in the state.