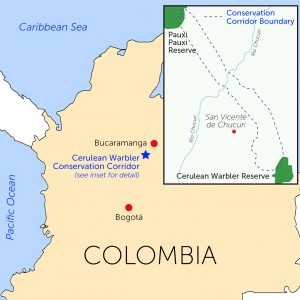 A conservation corridor in Colombia ten years in the making is now providing critical winter habitat for the Cerulean Warbler, a songbird whose numbers have fallen by 70 percent since 1966.

Six miles long and a half-mile wide, the corridor is the result of a collaboration between American Bird Conservancy and two Colombian partners: Fundación ProAves, one of the country’s leading conservation groups, and Fondo para la Acción Ambiental y la Niñez, an organization that focuses on community, youth, and environmental projects.

To create the corridor, 500,000 seedlings of 26 native trees — grown in nurseries at the nearby Cerulean Warbler and Pauxi Pauxi bird reserves — were used to reforest nearly 3,000 acres of land and connect existing habitat. More than 220 private landowners also participated in the project by planting shade trees on their coffee and cocoa farms and cattle ranches.

Colombia is home to more than 1,900 species of birds, so communities recognize and value migratory birds that arrive from North America, says Alonso Quevedo, Executive Director of Fundación ProAves. “People in Colombia celebrate being the nation with the highest bird diversity in the world,” he says. “We are proud of our role in fostering this knowledge and pride for birds.”

Once among the most abundant breeding warblers in the Ohio and Mississippi river valleys, the Cerulean Warbler is now one of the most imperiled migrant songbirds in the Western Hemisphere. Conservation work on the warbler’s breeding grounds in the Midwest and Appalachia have helped, but as the bird loses its winter habitat in Latin America, its decline continues.

Haven for More Than 150 Species

This conservation corridor protects and preserves critical habitat for more than 150 species of birds, including migrants like the Golden-winged Warbler, Black-and-white Warbler, Swainson’s Warbler, and Rose-Breasted Grosbeak, among many others. It also provides habitat for the Gorgeted Wood-quail and Mountain Grackle — two species found only in Colombia and considered globally endangered — and many other threatened species found nowhere else on earth.

The project also includes a component to measure biodiversity success, such as changes in the population of Cerulean Warbler and Gorgeted Wood-quail, as well as overall bird monitoring. Current protocols are in place to monitor trees planted in reforestation plots by measuring them each month to gauge progress. The data will inform the project’s next phase of nurturing the growth of planted trees and planning for the tripling of the corridor in the years to come.

« Should You Hire a Consultant?
Coffee Drinkers Increasingly Turning to Bird-Friendly Blends »