Posted on Wednesday, October 31st, 2012 by aadmin | Comments Off on Conservation Assessment of American Birds Show More Than a Third Need Help 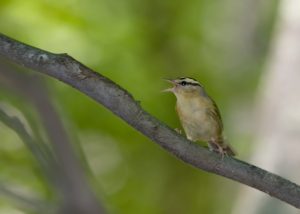 A new study on the conservation status of American birds completed by American Bird Conservancy (ABC) is the first-ever published to include the full range of bird diversity in all 50 U.S. states and dependent territories. The study finds that more than one third of these birds are in need of conservation attention. More details, including a complete bird list with conservation rankings, can be found at abcbirds.org/checklist.

While the conservation status of bird species has been widely researched in the past, the new study is the first national assessment to also rank the status of subspecies: regional forms of species that differ in appearance, and sometimes in habitat choice and migration patterns.

“By looking beyond the species we can better gauge the conservation status of the total diversity of birds in the United States,” said the study’s principal author and American Bird Conservancy Vice President, Mike Parr. “There are more than twice as many subspecies recognized as there are full species, so these data provide a more complete picture than we have ever had previously. In addition, birds that are today classed as subspecies may tomorrow be re-classified as full species when more information comes to light. This study will help make sure we don’t miss these birds as we move forward with conservation programs. While the good news is that most of the highest scoring (most “At-Risk”) birds are already protected by the Endangered Species Act, there are definitely some surprises in here too,” Parr said.

“ABC’s Conservation Ranking of bird subspecies is a major contribution to our understanding of bird conservation priorities. This assessment elevates these taxa to genuine elements of biodiversity that deserve more attention, and reinforces the fact that we have bird conservation work to do essentially anywhere you look in the United States” said Terry Rich, National Coordinator for Partners in Flight (PIF), a cooperative effort concerned with conserving bird populations in the Western Hemisphere.

Some examples of birds that are of particular concern are subspecies such as the eastern Bewick’s Wren, the California population of the Black Rail, the eastern Painted Bunting, and the Gulf Coast population of the Snowy Plover; and full species such as the Bicknell’s Thrush, Brown-capped Rosy-Finch, and the Buff-breasted Sandpiper. These are also birds that exemplify the range of threats that birds face today, ranging from habitat loss to climate change.

Half of the birds of greatest concern are restricted to Hawai‘i, yet endangered Hawaiian species such as the Palila and Maui Parrotbill tend to receive significantly less recovery funding than their mainland counterparts. “Having a high score on this list is a red flag,” Parr added. “We need to pay attention to these birds. If you have high cholesterol, it doesn’t mean you have heart disease, but you do want to do something about it. The same principle applies to many birds on this list.”

“By focusing new conservation attention on distinctive bird populations adapted to local habitats, this new analysis adds significantly to our species-centric view of conservation priorities,” said Ken Rosenberg of the Cornell Lab of Ornithology and Chair of Partners in Flight’s International Science Committee. “Our hope is that more regional and local groups will become engaged in helping to keep these birds from slipping through the conservation cracks.”

The scoring system used by the study employs a standard methodology developed by bird scientists working through PIF, and adopts PIF scores for full species. These scores provide a total “vulnerability rank” for each bird based on a range of factors from population size to threats. Based on these scores, ABC also ranked subspecies, and then placed each bird into one of four status categories: Secure (), Potential Concern (), Vulnerable (), or At-Risk ().

“Without the significant body of work already conducted by Partners in Flight and the many independent scientists and volunteers who have contributed the core data on species, the current study would not have been possible,” Parr added.

In total, of the 1,826 birds that were assessed, 273 species or subspecies (or 15%) were regarded as Secure . Some of these are birds (e.g., the familiar American Robin) that have been able to adapt well to habitat changes caused by humans, while more specialized species, for example, the Wood Thrush and Grasshopper Sparrow, have been unable to adapt to many of these changes. A further 850 birds (46%) were considered to be of Potential Concern , meaning that they are also currently safe, but may need more careful monitoring than those in the Secure category. The remaining birds were categorized as Vulnerable  (547 birds – 30%), and At-Risk  (156 birds – 9%).

“Many of the species and subspecies that are of greatest concern are specialists – restricted to certain food sources or particular natural habitats,” said American Bird Conservancy President George Fenwick. “We are urging the bird conservation community to take a closer look at the Vulnerable and At-Risk species and subspecies in particular. Many of these are below the radar for conservation right now,” he added. “Of course this doesn’t mean that we shouldn’t try to keep common birds common as well. As conservationists, our goal should be to maintain both the abundance and the diversity of birds. Both common and rare species are sustaining significant and unnecessary losses due to habitat change and avoidable mortality caused, for example, by collisions, pesticides, and cat predation.”

In addition to addressing the status of species and subspecies, the study has also created a list of birds that are differentiated because of the habitats to which they are restricted. These “habitypes” are typically birds that are otherwise identical to related populations, but use different ecosystems for nesting or foraging. For example, the Swainson’s Warbler has one population that nests in Appalachian rhododendron forests and another that nests in bottomland swamps; and the Marbled Murrelet has one population that nests in trees in Pacific old-growth forests and one that nests on the ground.

“While this assessment is the most complete we have, it should be considered a starting point, not an endpoint,” said David Pashley, ABC’s Vice President of U.S. Conservation Partnerships. “We hope it will begin a conversation that will lead to an optimal system of both setting and acting on bird conservation priorities for all birds.”

“The new study also provides a baseline or “scorecard” against which future changes in bird populations and threats can be assessed,” added Parr. “The total of all the conservation assessment scores for the 1,826 taxa amounts to 21,662. When we reassess bird conservation status in the future, we will be able to see how this total number differs, providing a measure of comparison to this 2012 assessment.”

This press release was produced by the American Bird Conservancy.