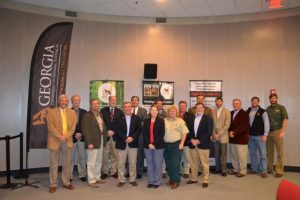 Members of the Georgia Bobwhite Technical Team, representing 15 conservation and/or land management organizations, recently turned out in support of a Memorandum of Agreement at the Go Fish Education Center in Perry, GA as a continued commitment to the recovery of bobwhite quail and other early successional habitat dependent species, according to the Georgia Department of Natural Resources’ Wildlife Resources Division.

“The northern bobwhite quail is an iconic wildlife species being formally designated as the state’s Game Bird,” said DNR Commissioner Mark Williams.  “We are pleased that the partnering organizations that make up the Georgia Bobwhite Technical Team have formally recommitted to the conservation of this indicator species.”

All of the participating organizations are committed to the recovery of bobwhite quail and other species dependent on early successional habitat which is the vegetative community that occurs for several years after a soil disturbance (e.g., prescribed fire) and is comprised of annual and perennial plants. Participants include: the U.S. Forest Service, the Chattahoochee-Oconee National Forest; the Georgia Soil and Water Conservation Commission; Georgia Association of Conservation Districts; Quail Forever; the Georgia Department of Natural Resources; the U.S. Army, Fort Stewart, Fort Gordon, and Fort Benning; the Farm Service Agency; the Warnell School of Forestry and Natural  Resources, University of Georgia; the School of Forestry and Wildlife Sciences, the Georgia Forestry Commission; the Natural Resources Conservation Service, the National Wild Turkey Federation, the U.S. Fish and Wildlife Service and the Tall Timbers Research Station and Land Conservancy.

In recent decades, quail in Georgia have experienced drastic population declines because of extensive land use changes resulting in a loss or degradation of early succession habitat. This is true not only for quail, but also for certain songbirds and many other wildlife species.  This decline has resulted in a reduction of quail hunters and wildlife associated recreation opportunities for Georgia and in the loss of many millions of dollars of economic revenue in rural Georgia communities. Similar declines are occurring across the South and are a priority concern for all southeastern state wildlife agencies.

In March 2002, the Southeastern Association of Fish and Wildlife Agencies Southeast Quail Study Group published the Northern Bobwhite Conservation Initiative, a 22-state recovery plan that establishes habitat and population goals by state and physiographic province for the restoration of bobwhite quail to their 1980 population level. This ultimately led to the formation of the National Bobwhite Technical Committee comprised of more than 600 wildlife biologists, researchers and managers focused on bobwhite restoration and management.

The plan was revised in 2011 to become the national Bobwhite Conservation Initiative 2.0.  This plan sets habitat and bobwhite population goals and objectives for spatially explicit focal landscapes. These core areas are critical to restoration success within these landscapes because they support source populations from which bobwhites can quickly pioneer into restored, adjacent habitats. Georgia Wildlife Resources Division used this planning process to revise and refine the state’s Bobwhite Quail Initiative 2013–2023.  A total of 22 focal landscapes across Georgia’s Upper Coastal Plain were identified with the highest potential and lowest constraints for bobwhite restoration.  Successful implementation of the plan within these priority landscapes will restore approximately 24,000 wild quail coveys.

“The good news is that as a result of well-planned and intensified management programs, progress has been made and we have seen numerous bobwhite restoration success stories on private and public lands,” said Wildlife Resources Division Director Dan Forster.  “Only through collaborative efforts like the Bobwhite Technical Team will we be able to reach our conservation goals of more substantial habitat restoration for all species that depend on early successional habitat.”

For more information on the Georgia Bobwhite Technical Team or the National Bobwhite Conservation Initiative, call the Division’s Private Land Program office in Forsyth, Ga. at (478) 994-7583.

Article produced by the Georgia Department of Natural Resources.