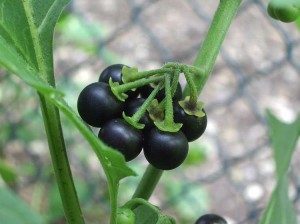 Fragmentation of habitat can be a serious threat to plant communities when it disrupts seed dispersal and limits population connectivity.  Corridors can promote seed dispersal over long distances, especially when dispersal is by birds.  However, bird habitat use varies seasonally: most birds are territorial in the summer but not the winter, and territoriality leads to less long-distance movement.  Therefore, the ability of corridors to promote seed dispersal via birds may change seasonally according to shifts in individual bird movements.  In their recent paper in Ecological Restoration, Evans and colleagues tested whether this hypothesis was true at a large experimental corridor site in South Carolina, the Savannah River Site.

Using transplanted American black nightshade (Solanum americanum), the researchers placed plants throughout cleared patches that were either connected or unconnected to other similar patches.  They then set up seed traps throughout the patches that birds could use as perches and deposit seeds that were later collected.  They noticed two main results: 1. Many more seeds were collected in winter than summer, and 2. The amount of seed dispersal into connected vs. unconnected patches varied according to season.  They argue that the disparity in seed numbers between seasons is due to bird movement and habitat use, i.e. birds in the summer are less likely to use the seed trap perches because they are staying within their territories.  This difference aside, they also found that during the summer, significantly fewer seeds were dispersed into connected patches than unconnected patches, whereas during the winter this trend was reversed.  They suggest that during the summer, the birds may be using the matrix more often to travel between patches, and that territories may include multiple unconnected patches.

The overall conclusion is that the utility of corridors in promoting seed dispersal can be seasonally dependent.  Managers that plan for connectivity in the landscape should consider how that landscape will be used by all dispersers, especially birds.  The effectiveness of a corridor may be apparent in one season and not another, and year-round monitoring could give a better idea of how corridors are being used.