Declining Warbler, 300+ Other Birds to Benefit from Ecuador Land Protection

Posted on Tuesday, August 12th, 2014 by aadmin | Comments Off on Declining Warbler, 300+ Other Birds to Benefit from Ecuador Land Protection 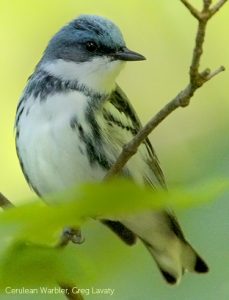 The Cerulean Warbler—one of the Americas’ fastest-declining migratory birds—now has more protected wintering habitat in Ecuador, thanks to a cooperative effort by Fundación Jocotoco, American Bird Conservancy, March Conservation Fund, and World Land Trust that safeguards rain forest at elevations preferred by the species.

Ecuador’s Narupa Reserve now totals 1,871 acres, including a new 117-acre parcel within the reserve in addition to a recently acquired 90-acre adjacent property.

Situated in the province of Napo at elevations ranging from 3,300 to 5,250 feet, the reserve includes Andean foothill rain forest with a remarkable convergence of lowland and highland wildlife species. Narupa Reserve, which is named for an elegant species of palm, is in the buffer zone of the Sumaco Napo-Galeras National Park and Antisana Ecological Reserve, which together protect 833,000 acres ranging from humid foothill forest to high Andean grasslands.

“It was absolutely a team effort,” said Rocio Merino, Executive Director of Fundación Jocotoco. “With the generous help of our excellent partners, we can now celebrate another milestone in our efforts to grow this reserve that provides such a needed haven for birds and other wildlife.”

Dr. George Fenwick, President of ABC, added: “It has been an eight-year effort and much like Rome was not built in a day, neither is a great reserve. It takes time and perseverance. The progress our collaboration has been making gives us hope that the birds and other wildlife we are trying to protect will continue to be here for future generations.”

“Partnership is essential for lasting conservation success, and I am delighted that World Land Trust has played its part in this concerted effort to extend Narupa Reserve,” said John Burton, World Land Trust Chief Executive.

Fenwick added: “The value of this reserve lies in its connection to forests at higher and lower elevations, which will allow animals, including the Cerulean Warbler, to move freely up and down slope as forests cope with climate change.”

The flagship species for the reserve, the Cerulean Warbler, is among the most threatened migratory land birds wintering in South America. It was formerly one of the most abundant breeding warblers in the Ohio and Mississippi River Valleys. Overall, Cerulean Warbler numbers have plummeted by almost 70 percent since 1966. This elusive bird winters in the northern Andes, while it breeds from the Great Lakes region to Georgia, and west to Wisconsin and Louisiana, with concentrations in the Appalachians and Central Hardwoods region.

Both the Cerulean’s breeding and wintering habitat are being lost. The eastern slope of the Andes, where Narupa Reserve lies, is one of the most important wintering areas for the species in Ecuador. During the winter of 2010-11, surveys in the reserve revealed that Cerulean Warblers are present at higher densities than is normally the case for this typically scarce bird. Identification of this warbler’s core habitat on the wintering grounds is a major focus of ABC’s Migratory Bird Program and will lead to additional conservation activities such as this acquisition at Narupa Reserve.

While numerous threats have been documented within the warbler’s breeding range, it was not until 2003 that threats to its limited wintering grounds were highlighted by “Grupo Ceruleo,” a coalition of avian experts. Contrary to the traditional assumption that wintering habitat was widely available, the coalition discovered that the Cerulean Warbler is a habitat specialist, relying on a narrow belt of subtropical forests between 2,500-5,500 feet in sheltered river basins of inter-montane Andean valleys, and that deforestation has cleared many important areas for the species. What little subtropical forest survives remains at risk, particularly from the conversion of traditional coffee plantations that provided suitable warbler habitat to “sun coffee” plantations, devoid of the shade trees on which the birds rely.

Within the reserve, more than 300 bird species have been recorded, and the list is still increasing. In addition to the Cerulean Warbler, other migratory birds that travel between the United States and South America’s humid forests include Canada Warbler, Olive-sided Flycatcher, Western and Eastern Wood-Pewees, Swainson’s Thrush, and Blackburnian Warbler. Several threatened species are also found in the reserve, including Black Tinamou, Military Macaw, Coppery-chested Jacamar, and Foothill Elaenia.

Fundación Jocotoco (FJ) established Narupa Reserve at an initial size of 250 acres in 2006. FJ has managed and expanded the reserve since that time with support from March Conservation Fund and American Bird Conservancy. In 2012, ABC funded mapping work for Narupa that guided the present land acquisition.

The reserve was established to protect a large block of eastern Andean foothill forest that bridges the large national parks, Sumaco Napo-Galeras and Antisana, one of the largest expanses of protected land in this part of Ecuador. These forests are globally threatened and have been the focus of extensive deforestation, as the elevation is optimal for development and agriculture. As a result, mid-elevation forests are globally under-represented in protected area systems in all Andean countries.

A nearby road was recently paved, increasing the economic factors that drive deforestation. Among the greatest concerns is cultivation of naranjilla, a plant that exhausts forest soils within a few years, leading to that plot’s abandonment and more forest clearing.

Because Narupa Reserve is fairly new, much of it is still poorly explored. New and surprising findings occur regularly, and a final list of birds using the reserve may yet grow to nearly 400 species. The variety of tanagers, tyrant flycatchers, and hummingbirds found on the reserve is also remarkable. A notable rarity is the Orange-breasted Falcon, a pair of which has bred for some years on a cliff immediately adjacent to the reserve; this represents the only known nesting in Ecuador for this globally threatened falcon.

Through camera trapping and analysis of tracks, several large mammals of note have been detected including puma, ocelot, and Brazilian tapir.

In addition to the variety of birds, the reserve features an expanding network of trails, and a new footbridge over the Río Hollín now provides access to primary forest at higher elevations. A few feeders are also being established. The river itself, complete with an area for swimming, provides a welcome retreat from the forest and offers a unique experience among FJ reserves.