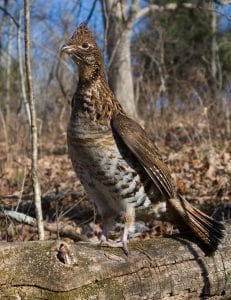 The Kentucky Department of Fish and Wildlife Resources is seeking public input on a draft of its new Ruffed Grouse and Young Forest Strategic Plan. The draft plan, written by wildlife biologists with input gained during a series of public meetings held last year, calls for partnerships to increase the amount of young forests that are critical for grouse populations. The plan is available for public review online at www.fw.ky.gov. Comments will be received until July 8.

Once found across Kentucky, grouse are now limited to the eastern mountains of the state. Grouse need a combination of a young forest’s heavy ground cover for protection from predators to raise their young, as well as nuts from mature oaks and beeches to help them survive the winter. These birds thrived in Kentucky in the 1970s and 1980s because of the amount of young forests created by surface mine reclamation, timbering and farm abandonment.

Since that time, much of Eastern Kentucky’s forests have matured into more open stands dominated by red maples in the understory. Maples are not as valuable to wildlife as trees that produce nuts, a high protein source of food.

The grouse restoration plan calls for a commitment to sustainable forest management to stimulate plant growth for grouse broods, high stem densities for year-round cover and oak regeneration for the future forest, while maintaining select mature, acorn-producing trees to help boost oak stands in the forest. The plan also calls for partnerships with other agencies and organizations to achieve goals, and public outreach to promote the importance of young forest habitat for other species like migratory songbirds and big game.

Article produced by the Kentucky Department of Fish and Wildlife.