Posted on Tuesday, April 2nd, 2013 by aadmin | Comments Off on Eastern Golden Eagle Working Group Honored by Wings Across the Americas 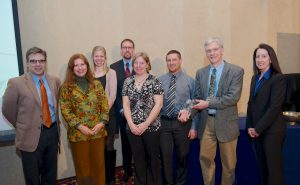 On March 27, the U.S. Forest Service’s Wings Across the Americas program honored the Eastern Golden Eagle Working Group, an international collaboration of biologists and wildlife managers from 20 institutions in the United States and Canada, with its 2013 Research and Management Partnership Award.

The Working Group has partnered with the Appalachian Mountains Joint Venture and other regional groups to coordinate conservation and research efforts for golden eagles in the Appalachian region.

“We all accomplish more when we join forces, and the Golden Eagle Working Group truly exemplifies the power of collaboration in science and conservation,” said Michael T. Rains, Director of the U.S. Forest Service’s Northern Research Station.

The small population of golden eagles in Eastern North America faces challenges that range from diminishing habitat, to incidental capture in traps, to wind turbines. Since its inception in 2010, the Eastern Golden Eagle Working Group has marshaled technology, research and enthused citizens to assess the status of the eastern golden eagle population and raise awareness of the threats they face.

Projects include a “camera trapping” program, in which approximately 200 volunteers and organizations support 150 trail camera stations from Maine to Georgia, including some on experimental research forests managed by the Forest Service. Camera stations are helping researchers to evaluate the population status not only of golden eagles, but also of other species, including bald eagle, red-shouldered hawk, eastern spotted skunk, fisher, and bobcat.

“Our objective is to ensure the long-term sustainability of Eastern golden eagle populations and to make the species a flagship for landscape-scale conservation,” Katzner said. “The survival of a charismatic species like the golden eagle truly demonstrates that in the eastern United States, healthy populations of wildlife are not mutually exclusive with large human populations”

The Eastern Golden Eagle Working Group has extensive outreach efforts designed to share its images and information with the public. It has developed several web sites (www.egewg.org; www.appalachianeagles.org) that shares images captured at the camera trapping sites and encourages additional volunteers to join the effort. Teachers’ use of the Working Group’s golden eagle data and images in the classroom has connected future generations of biologists and ornithologists with the Working Group.

Wings Across the Americas is sponsored by U.S. Forest Service programs including the National Forest System, State & Private Forestry, Research & Development and International Programs. Wings Across the Americas works with a wide range of partners in the United States and overseas to conserve habitats and populations of birds, bats, butterflies, and dragonflies.

Visit a photo gallery showcasing the work of the Group and read full descriptions of this and other 2013 award winners.

This press release was produced by the U.S. Forest Service.