Posted on Thursday, August 3rd, 2017 by aadmin | Comments Off on Farm Bill Works for Landowners and Birds, New Report Finds 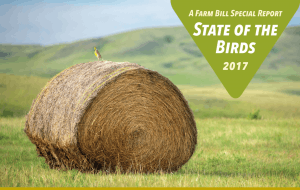 State of the Birds 2017 Identifies Benefits for Agriculture, Forestry, and Conservation

(Washington, D.C., August 3, 2017) Thirty-seven million. That’s the increase in the number of waterfowl in the Prairie Pothole Region over the past quarter-century, thanks to the Farm Bill. The State of the Birds 2017 report, released today by the North American Bird Conservation Initiative (NABCI), documents the many benefits the Farm Bill—America’s single largest source of conservation funding for private lands—has delivered to birds, farmers, and rural communities.

For more than three decades, the Farm Bill has been an effective tool for wildlife conservation, sustaining essential habitat for more than 100 species. For farmers, ranchers, and forest owners, the bill provides a safety net that helps keep working lands from being developed.  As the 2018 Farm Bill is debated for reauthorization in Congress, the report calls attention to the benefits of investing in conservation on private lands, which make up nearly 70 percent of the land area in the contiguous United States.

“For more than twenty years, the Farm Bill has provided widespread conservation benefits for our nation’s farmers, ranchers, sportsmen and all who enjoy clean drinking water, flood protection and healthy wildlife populations,” said Ducks Unlimited Chief Scientist Tom Moorman. “Millions of acres of working lands are conserved through Farm Bill conservation programs that ensure long-term sustainability and productivity of the land that supports waterfowl and many other species of fish and wildlife.”

It’s a striking record of success. Before 1990, for instance, wetland birds and waterfowl were on the decline, trending downward by 10 percent a year. Since wetland easements were added to the Farm Bill, those populations have soared 51 percent.

Grasslands and forest birds have benefited as well. “There’s no doubt that the Farm Bill’s conservation provisions have helped to stabilize populations of grassland birds, which had suffered a nearly 50 percent drop before grassland easements were introduced in 2003,” said Kenneth V. Rosenberg of the Cornell Lab of Ornithology, and the report’s team leader. “Since that time, we’ve seen an encouraging 3 percent increase in numbers.” The report documents a similar turnaround in forest bird populations, which had dropped 19 percent before the Farm Bill’s Forestry Title was introduced in 1990.

State of the Birds is a regular report published by NABCI’s US Committee, a coalition of 28 state and federal agencies, nonprofit organizations, and bird-focused partnerships. Scientists, government agencies, and bird conservation groups use the State of the Birds as a resource in decision-making about conservation research, policies, and programs. Last year, NABCI’s State of North America’s Birds Report found that more than one-third of North America’s bird species require urgent conservation action.

Farm Bill programs support many kinds of partnerships with private landowners. As documented in the 2017 report, that approach pays off in many ways. Here are a few examples of what the Farm Bill gets done:

”Farm Bill conservation programs, such as the Regional Conservation Partnership Program, get on-the-ground work done for species of greatest concern such as Golden-winged Warbler and Northern Bobwhite,” said Steve Holmer, Vice President of Policy at American Bird Conservancy. “The 2018 Farm Bill will hopefully build on this success by fully supporting these conservation programs.”

The U.S. Committee of the North American Bird Conservation Initiative (NABCI) is a coalition of 28 federal and state agencies, non-profit organizations, and bird-focused partnerships that advance biological, social, and scientific priorities for North American bird conservation.