Posted on Tuesday, January 6th, 2015 by aadmin | Comments Off on Follow the American Woodcock Migration Live! 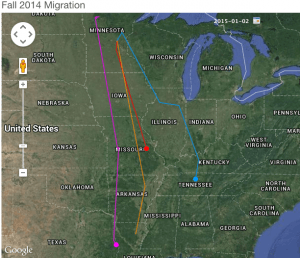 These solar-powered PTTs are small enough to fit on a woodcock’s back during migration and powerful enough to transmit multiple locations to the ARGOS satellite network.

Learning Essential Information About Woodcock: The location data from this project will be used to document timing of migration initiation, rate of migration, stopover length, routes taken, and final destination for both spring and fall migration. These data can then be used to identify priority areas to focus habitat management and conservation efforts for woodcock along migration routes.

Migration Maps: The solar PTTs transmit the woodcock’s location every two and half days (10 hours on, 48 hours off) to conserve battery. During some cycles no locations are recorded. This can be due to problems charging the unit’s battery or transmitting to the satellite as result of the thick cover used by woodcock. The recorded locations are represented by a colored dot. Clicking on the dots or along the migration path will display the date on which that location was recorded. The calendar can be used to see where each woodcock was on a given date. The points can be dragged along the migration path to see the relative locations of other woodcock, along with the date the locations were recorded displayed on the top of each map.

Pilot Study Success: Researchers deployed six transmitters in a pilot study during fall 2013 and late winter 2014. One woodcock was killed by an owl soon after its release, but the other five successfully migrated. In fall 2014, researchers have deployed PTTs on three woodcock at Sherburne National Wildlife Refuge, Minnesota, and the migratory paths of those woodcock can be tracked below.

Important Future Research: By February 2016, researchers plan on deploying up to 45 PTTs on woodcock on both their breeding and wintering grounds in the Central Management Region.