From One to 135: New Jersey’s Bald Eagle Success Story

Posted on Thursday, May 9th, 2013 by aadmin | Comments Off on From One to 135: New Jersey’s Bald Eagle Success Story 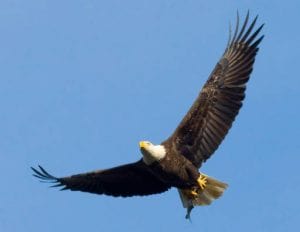 In 1982, New Jersey’s only remaining bald eagle nest failed for at least the sixth consecutive year.

Every year, the eagle eggs at the Bear Swamp nest were just too thin to withstand normal incubation—a result of residual contamination from the pesticide DDT. With hopes of securing a future for the species in the Garden State, biologists intervened.

“In a delicate procedure, we removed the egg after just two weeks, replacing it with a fake egg to keep the adults incubating at the nest,” says Kathleen Clark, a biologist with the New Jersey Division of Fish and Wildlife’s Endangered and Nongame Species Program (ENSP). “The real egg was delivered to the U.S. Fish and Wildlife Service’s Patuxent Wildlife Research Center in Maryland for artificial incubation.”

With the help of lightweight, incubating chickens, the eagle egg hatched. After two weeks of monitoring, the eaglet was placed back into the nest at Bear Swamp. Artificial incubation continued successfully at Bear Swamp until 1989, when a new adult female, unimpaired by DDT, began nesting and was able to hatch eggs without assistance. The eagle nest remains active today.

While biologists worked to make Bear Swamp productive, they tackled another project that involved bringing in young wild eagles from Canada, where they were common, and raising them until fledging. The project ran from 1983 through 1990, and resulted in the release of 60 young eagles.

“Bald eagles now grace the skies over New Jersey’s coastal rivers, estuaries, farmland and woodlands,” says Clark. “But this resurgence blossomed only recently, after decades of work by biologists in our program and the U.S. Fish and Wildlife Service.”

In 2012, ENSP monitored 135 eagle pairs during the nesting season, 119 of which produced eggs with 165 young successfully fledged. The success marks an important time for both agencies, which are celebrating 40 years of state and federal endangered species legislation that enables the recovery of imperiled wildlife.

A look back over the last 40 years weaves a complex history for the bald eagle. Long before the introduction of the pesticide DDT, habitat destruction, shootings, and poisonings had greatly reduced the nation’s eagle population. Just as persecution of eagles and other birds of prey was fading, post-war chemical introductions began, threatening these same top-tier birds.

DDT was used heavily in New Jersey, in part for mosquito control, and by 1970, only the Bear Swamp nest remained. Consequently, the bald eagle was listed as endangered under New Jersey’s new Endangered and Nongame Species Conservation Act in 1973, and as federally endangered throughout the lower 48 states, under the Endangered Species Act (ESA) in 1978.

Thanks to the banning of DDT, habitat protection afforded by the ESA, and intensive conservation work by many partners, the bald eagle was deemed nationally recovered on August 2007.

The bald eagles remains protected under the Bald and Golden Eagle Protection Act and the New Jersey Endangered and Nongame Species Conservation Act. In the Garden State, this bird still faces disturbance and habitat loss. Volunteers and biologists actively monitor and search for nests to continue habitat protection efforts.

“With continued management and monitoring by concerned landowners and volunteers, the future of the bald eagle in New Jersey looks bright,” says Clark.

Article produced by the U.S. Fish and Wildlife Service.