Posted on Wednesday, July 25th, 2012 by aadmin | Comments Off on Green Jobs Plan to Restore Forests to Benefit Cerulean Warblers, Other Bird 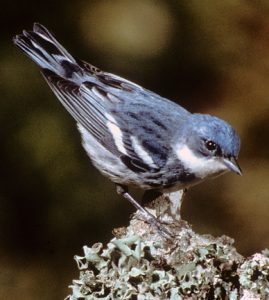 A broad coalition of conservation groups is asking Congress and the Obama Administration to create over 2,000 jobs and improve the environment by funding an innovative program to reforest former mining lands in Appalachia. Over one million acres in the heart of the Appalachian Mountains that were once forested now support mostly non-native shrubs and grasses following mining activities. When these mine lands were reclaimed, the soils were heavily compacted to prevent erosion, and seeded with grasses rather than native trees. The compaction was so severe that it has prevented trees from subsequently taking root naturally.

“Small and large pilot projects to develop the needed techniques to plant trees in highly compacted soils have been completed throughout Appalachian coal states, demonstrating both the job creation potential and environmental benefits these projects engender,” said Brian Smith, American Bird Conservancy’s Appalachian Joint Venture Coordinator. “This is a shovel-ready project that will provide immediate benefits to rural communities.”

The Green Forest Works for Appalachia program would result in the creation of 2,000 jobs by replanting 125 million trees on 175,000 acres of old mining lands over a five-year period. The compacted sites would be “ripped” using special machinery to loosen the soils. Tree seedlings would then be planted in the ripped soils, which provide deep cracks and crevices for water to infiltrate and roots to spread.

As these forests develop, they will provide important habitat for birds and other wildlife, which will in turn create jobs from recreation and tourism as birdwatchers, hunters, hikers, and fishers begin to use these areas. Interior forest species such as the declining Cerulean Warbler will particularly benefit. In addition, these forests will store substantially more carbon than the grasslands they will replace.

The proposal was developed by the Appalachian Regional Reforestation Initiative Science Team, a coalition of Appalachian residents including scientists, foresters, and conservationists. The proposal has the backing of a broad coalition of bird conservation organizations including American Bird Conservancy, environmental organizations, forest-product companies, and volunteer groups working to help communities afflicted with high-unemployment. These groups are asking that the Green Forest Works proposal be included in the President’s 2011 budget request, and that Congress appropriate $15 million in 2011.

The Green Forest Works proposal and its potential t create green jobs and stimulate local economies has generated considerable press interest in the Appalachian region, which has been particularly hard hit by the recession. The Executive Summary of the Green Forest Works proposal is available at http://www.abcbirds.org/newsandreports/green_jobs_proposal_final_10_18_09.pdf.