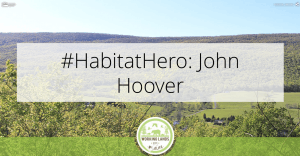 Check out the Story Map of this Habitat Hero Blog here.

Since 1866 – a year after the end of the Civil War – John Hoover’s family has owned property in Centre County, Pennsylvania. Over the decades, the largely forested property became subdivided and boundary lines and titles blurred with most of the land going into disuse. Nearly 40 years ago, when John inherited a portion of the original property, he figured the best way to unclutter boundary lines and make better use of the land was to buy as much of the surrounding forest and original deed as possible.

“I’m a mechanical engineer and mostly dealt in new product design and development,” said Hoover. “And this land issue was a challenge, a unique problem that I wanted to solve. It took me more than a dozen years but I ended up bringing together 600 acres under single ownership.”

Hoover currently lives in Connecticut but plans to retire soon and relocate to a home next to his forest.

“Something that occurred to me after I acquired all this land, is that I didn’t really have a goal in mind for the property itself,” said Hoover. “So, I talked with a forester, and he told me about the benefits of harvesting trees for the health of the forest and as a way to enhance game species such as deer, turkey and grouse.”

The first harvest, which cut and thinned out aspen trees, saw a dramatic increase in game species on the land. Six more harvests followed. Each targeted at a specific section of the property.

Each successful harvest helped his bottom line by selling timber while diversifying both his forest and the species of wildlife that visited it.

“As I walk through the land, I look at it as entering different rooms of a house. Each room is different and has its own use,” Hoover said. “The property is subdivided like that, with individual smaller and uneven aged tracts created by forest harvests conducted at different times. Some with really intense management, and others where I have not done anything.”

Through these groups, Hoover was able to get technical and financial assistance to help plan and implement forest management practices. With this help, he has not only improved his bottom line, but he has been able to create top-notch wildlife habitat.

The first is Working Lands for Wildlife, an NRCS-led effort to help private landowners like Hoover restore declining habitats to help at-risk species. In the Appalachians, NRCS is helping landowners manage for young forests to benefit the golden-winged warbler and other species.

Golden-winged warblers in the last 45 years have suffered one of the steepest population declines of any songbird. Since the 1960s, the young forests that the bird uses for nesting has decreased by 43 percent in the Appalachians.

Working with foresters and biologists, Hoover developed a management plan and then went about creating young forest habitat on his property to provide ideal foraging space, shelter, and nesting sites for a host of wildlife that depend on this type of ecosystem.

Meanwhile, Hoover is also participating in the Cerulean Warbler Appalachian Forestland Enhancement Project, which is led by AMJV and funded through NRCS’ Regional Conservation Partnership Program. The regional project seeks to implement active forest management on private lands to improve 12,500 acres of forest habitat and 1,000 acres of reclaimed mine lands for the cerulean warbler, which like the golden-winged warbler, has suffered from population declines.

Cerulean warblers prefer older forests with canopy openings, which like young forests, are not common in Appalachia. Hoover is currently thinning out dense mature forest areas that contain tall deciduous trees to create open canopies and gaps to allow sunlight to reach the forest floor, promoting the growth of saplings, shrubs, and other vegetation in the forest understory.

In addition to helping the golden-winged warbler and cerulean warbler, managing for healthier forests also leaves the best trees on the tract: tall, straight, and defect free. They will be the seed source for the next trees that make up the future forest, Hoover said.

“I am blessed and lucky to have a good chunk of land that allows me to do different activities on different sections,” said Hoover. “I’m able to focus on hardwood development in one area that doesn’t benefit wildlife as much but benefits trees, and in other areas I can focus management that is best for bird and other wildlife habitat.”

“The mix of all this activity creates various forest stages on the property that works out very well for wildlife and the overall health of the land.”