Improving Habitat for Cerulean Warblers on more than 1300 Acres

Posted on Monday, October 24th, 2016 by aadmin | Comments Off on Improving Habitat for Cerulean Warblers on more than 1300 Acres 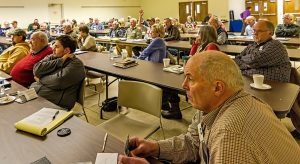 Through the Cerulean Warbler Appalachian Forestland Enhancement Project, Pennsylvania was charged with a goal of improving habitat for Cerulean Warblers on more than 7,000 acres in the state. Since the project started in May 2015, exciting progress has been made toward achieving that goal and, hopefully, reversing the decline of this imperiled species. Last February, the Pennsylvania Cerulean Warbler Regional Conservation Parternship Program (RCPP) team conducted our first outreach mailing to Pennsylvania’s forest landowners to help identify those interested in participating in the program. About 1,000 mailings were sent to landowners with more than 50 acres of property within selected counties in Cerulean Warbler focal areas. As a result of this mailing, we received 63 responses from interested landowners, of which 14 went on to submit applications to participate in the program. Additional outreach efforts included presentations at local woodland owners groups and newsletter articles in publications aimed at the state’s hunters and outdoor enthusiasts.

We then developed contracts with private landowners through the Natural Resources Conservation Service (NRCS). Through these contracts, we are providing landowners with technical and financial assistance to conduct active forest management to improve forest health and benefit Cerulean Warblers and other wildlife species. This year, 33 contracts were awarded in Pennsylvania, providing landowners with more than $950,000 in financial assistance and improving habitat for Cerulean Warblers on more than 1300 acres in 14 counties.

The work doesn’t end now that the contracts are signed. Our foresters are already offering technical assistance to landowners implementing their contracts. Most projects to improve Cerulean Warbler habitat include thinning the forest by removing low-quality trees. This year’s contracts include more than 1,200 acres of forest thinnings, with our foresters marking trees to indicate which should be removed and which should be saved to best address forest health concerns and improve Cerulean Warbler habitat. Our foresters also coordinate with contractors to ensure that practices such as herbicide applications and deer exclusion fences are installed successfully. Many projects include an herbicide application to control undesirable or invasive plants on the forest floor, giving native plants and young oak trees a chance to become established. Excessive browsing by deer is a very important factor in Pennsylvania that limits the regeneration of oak forests that Cerulean Warblers prefer, so fencing to exclude deer is a vital component to many of our projects.

Because Cerulean Warbler projects typically include multiple management practices, they can take years to implement.  The average contract length is 2-3 years, but often there are limited times of the year during which practices can be implemented and a specific order followed.  Once the contract is signed, the PA RCPP Coordinator checks in frequently with landowners to help ensure projects stay on schedule, and process payments for completed practices. At the same time, outreach efforts for the next fiscal year have already begun! Interested landowners are submitting applications to be considered for funding in FY17, and so far more than 50 have been received.

The Cerulean Warbler Appalachian Forestland Enhancement Project is proving to be a valuable asset to private landowners in the state looking to improve their woods for birds and other wildlife. While many don’t recognize the Cerulean Warbler and may not even have an interest in the species directly, they are driven by a desire to improve the land for future generations of people and wildlife, and we’re happy to help.