Posted on Thursday, July 26th, 2012 by aadmin | Comments Off on Initiative Will Benefit Ten-State Effort to Save Declining Songbird 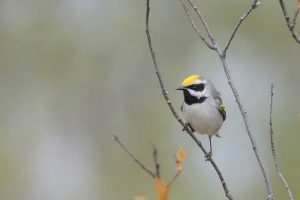 The new “Working Lands For Wildlife” (WLW) project announced yesterday by the Departments of the Interior and Agriculture will provide substantial benefits to birds and other wildlife, but will be especially beneficial to the imperiled Golden-winged Warbler.

The WLW project will provide a huge boost for a Golden-winged Warbler conservation effort in the eastern U.S. involving dozens of organizations across ten states. The effort is being facilitated by the Appalachian Mountains Joint Venture (AMJV), and American Bird Conservancy (ABC).  Partners include federal and state agencies, universities and not-for-profit conservation organizations. The Golden-winged Warbler effort is being carried out in the species’ Appalachian breeding range of Georgia, Tennessee, North Carolina, Virginia, Kentucky, West Virginia, Maryland, Pennsylvania, New York, and New Jersey.

“The Golden-winged Warbler is one of the most seriously threatened, non-federally listed species in eastern North America. Everyone familiar with its plight should be excited about the WLW project and the opportunity it provides to better engage private landowners in the conservation effort. If we are going to have this bird around for future generations, we’re going to need both public and private collaboration,” said Brian Smith, AMJV Coordinator and a wildlife biologist with ABC.

“The additional funding from the WLW project will provide for increased on-the-ground habitat restoration and conservation for the Golden-winged Warbler. These efforts will be complemented by technical expertise that AMJV partners will provide through monitoring the species’ response to habitat work, and the vital educational component designed to improve understanding of the importance of young forests and scrubby, open habitat to this bird,” Smith said.

In addition to benefits to the Golden-winged Warbler, the WLW will also boost conservation efforts for the Greater Sage-grouse, Lesser Prairie-chicken, and Southwestern Willow Flycatcher in the western and central U.S., as well as three non-bird species currently listed or proposed for listing under the Endangered Species Act: the New England cottontail rabbit, bog turtle, and gopher tortoise.

This WLW project follows a sage-grouse initiative in the West that began nearly two years ago. The initiative is being delivered by the Natural Resources Conservation Service (NRCS) through conservation programs in the Farm Bill, with support from the U.S. Fish and Wildlife Service (FWS) Partners for Fish and Wildlife Program, state fish and wildlife agencies, and other partners.

The Appalachian Mountains and the Upper Midwest/Great Lakes region are the population strongholds for Golden-winged Warbler; however the species has undergone significant population declines throughout the greater Appalachian region due to loss, degradation, and modification of its preferred young forest habitat. Hybridization with the closely-related Blue-winged Warbler, nest parasitism by Brown-headed Cowbirds, and deforestation on its wintering grounds in Central and South America are also factors in this species’ decline.

ABC has made the Golden-winged Warbler a major focus of its conservation work, and is coordinating conservation activities in both the US and in wintering ground sites in Central and South America.

ABC is working to boost Golden-winged populations in a number of ways, including participation in the Appalachian Regional Reforestation Initiative  – a coalition of federal and local agencies, citizens, and other groups dedicated to restoring forests on reclaimed mine sites in the eastern United States. These restored forests can provide much-needed habitat for the Golden-winged Warbler and other early-successional species such as the American Woodcock. Also, ABC works closely with the National Fish and Wildlife Foundation and the Golden-winged Warbler Working Group to develop and deliver on-the-ground projects throughout the species’ range.

ABC is also working with partners in Latin America to restore essential wintering habitat for the Golden-winged Warbler through cooperative efforts with local communities, coffee growers, and ranchers that promote bird-friendly practices such as silvipasture (the practice of combining forestry and grazing of domesticated animals in a mutually beneficial way) and shade-grown coffee. ABC is also planting thousands of trees to restore native wintering habitat for the Golden-winged Warbler and other neotropical migrants.

On June 2, 2011, FWS announced that listing the Golden-winged Warbler under the Endangered Species Act may be warranted, and the Service is now initiating a full review of the species. In addition, many state fish and wildlife agencies within the Appalachian region have listed this bird as a species in greatest need of conservation within their states’ boundaries.

Before widespread European settlement of the Appalachian region, Golden-winged Warblers relied on young forest or open woodlands created by natural fires, natural disasters, or beavers. During the early and mid-part of the Twentieth Century, much of the region was cleared through timber harvesting, and later, through strip mining for coal. Second growth vegetation and revegetation of these areas resulted in habitats that were conducive to species such as the Golden-winged Warbler. Over time, these areas have matured or become dominated by species that do not provide the habitat structure that warblers need.

The WLW initiative will focus on creating and maintaining the types of habitat necessary to sustain breeding populations of warblers in and around their current breeding areas. This will include efforts designed to expand the existing Appalachian range of the species and increase the amount of available habitat throughout the Appalachians. Two particular challenges are that many key areas are located within a matrix of lands with mixed ownership and there are potential conflicts with regard to commercial timber harvests.

The AMJV is one of 18 habitat Joint Venture partnerships in the United States. The AMJV is comprised of state and federal government agencies, non-governmental organizations, and industries who work together to ensure the long-term sustainability of native bird populations that breed in the Appalachian Mountains.