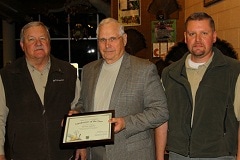 “Each year, we recognize individuals and groups in each of the five wildlife regions based on their habitat management work, community outreach, and recreational opportunities,” said Wildlife Division Director Karen Waldrop.

“We would also like to acknowledge three of our partners from the NRCS, who work to ensure that Kentucky’s private lands are managed responsibly for each of us to enjoy,” she continued. “NRCS has proven to be a valuable asset in promoting and implementing the conservation programs that restore wildlife habitat.”

Winners were announced at an awards banquet held at the Salato Wildlife Education Center in Frankfort Dec. 7.

Landowner of the Year

Edward Anthony, of Paducah, Ky., manages more than 800 acres in Ballard and McCracken counties. He enrolled his entire 472-acre farm in McCracken County into the Wetlands Reserve Program. His Ballard County properties greatly benefit waterfowl because they are managed as wetland-bottomland hardwood forests. Anthony allows students from Murray State University to use his property as an outdoor lab and he allows family and friends to hunt on his farms. He was nominated by Wildlife Biologist Kevin Tucker.
Landowner Regional Winners

Chess Riddle, of Madisonville, Ky., manages 650 acres in Muhlenberg County. He has enrolled 125 acres in the Conservation Reserve Program and hosted a prescribed fire field day on his property, using controlled burning to enhance grassland habitat for bobwhite quail. Friends and family are encouraged to use his property for hunting. He was nominated by Wildlife Biologist Thomas Young.

Hank Whitman, of Nicholasville, Ky., manages 363 acres in Fayette County. He uses the Conservation Reserve Program to establish riparian buffers and wildlife corridors to connect key habitats together. He has planted more than 5,000 native hardwood trees on his property and manages his open land for bobwhite quail and other small game. He allows youth to hunt on his property. He was nominated by Wildlife Biologist Clay Smitson,

Jeff Bunch, of Taylor Mill, Ky., owns more than 360 acres in Mason County. He has worked to eradicate invasive bush honeysuckle from 240 acres of his woodlands. He manages his open land for rabbits and has established numerous brush piles and mineral licks. He also encourages his neighbors to manage the wildlife habitat on their properties and allows family and friends to hunt on his farm. He was nominated by Wildlife Biologist Wes Mattox.

Herb Davis Sr., of Dunville, Ky., manages 956 acres in Casey and Taylor counties for deer, turkey, waterfowl and small game. He has completed more than 150 acres of timber stand improvement; planted more than 125 acres of native grasses; created several shallow water wetlands; and has used controlled burning to mange open lands. Davis is seen as a conservation leader by many in the community. He was nominated by Wildlife Biologist Chris Mason.

Business of the Year

The Loretto Motherhouse in Nerinx, Ky., owns 780 acres property in Marion County. The working farm is a model property for wildlife management: the owners have planted thousands of trees and converted hundreds of acres to native grasses. The Motherhouse also hosts an annual deer hunt for local youths and adults. The group was nominated by Wildlife Biologist Jason Nally.

Livingston County Fiscal Court in Smithland, Ky., manages 2,433 acres of property that was purchased using Land Heritage grants. The property is within the boundary of the Livingston County Quail Focus Area. It is open to public hunting. The agency was nominated by Wildlife Biologist Pat Brandon.

Cumberland Woodlands Inc., based in Stanford, Ky., manages multiple properties totaling more than 10,000 acres across southeastern Kentucky. The business emphasizes forestland improvement. Their 1,500-acre Cumberland County property serves as a hunting lease for Hope for Heroes, a group which helps disabled veterans get back into the outdoors. The business was nominated by Wildlife
Biologist Chris Mason

Catlettsburg Refining LLC of Catlettsburg, Ky., manages 360 acres in Boyd County, including the Savage Branch Wildlife Reserve. The business manages woodlands and open land for wildlife, and includes a wildflower-pollinator area. Hundreds of students visit the property each year to learn about the outdoors and wildlife management. The business was nominated by Wildlife Biologist Harley Weaver.

NRCS Conservationist of the Year

Kurt Mason, whose office is in Louisville, Ky., provides wildlife habitat management consultation to individuals, groups, businesses, development firms and governments. In the past three years, he has helped establish more than 5,800 acres of wildlife habitat in the counties where he works. Mason currently serves on several boards and councils aimed at managing environmental resources. He was nominated by Farm Bill Biologist Terri Estes, Wildlife Biologist Jason Nally and Farm Bill-Wildlife Biologist Danny Hughes.

Craig Givens, whose office is in Russellville, Ky., has been instrumental in promoting the Conservation Reserve Program and the Wetland Reserve Program in the counties that he covers. He has worked with numerous other agencies to promote wildlife habitat management on working lands and enjoys the outdoors as an avid angler. He was nominated by Farm Bill Biologist Tyler Reagan and Farm Bill-Wildlife Biologist Danny Hughes.

Greta Steverson, whose office is in Burlington, Ky., is the lead district conservationist for seven northern Kentucky counties, where she has worked with department biologists to improve wildlife habitat. She also leads or participates in several committees and groups within NRCS in Kentucky. She was nominated by Wildlife Biologist Zak Danks.

This news article was published by the Kentucky Departement of Fish and Wildlife Resources.