Posted on Monday, December 21st, 2015 by aadmin | Comments Off on Largest Addition to PA State Forest System in 65 Years 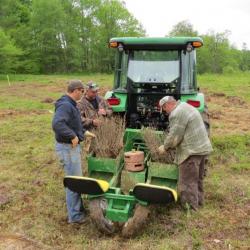 A significant young forest restoration project continues to expand on the 25,000-acre Clermont Tract in northern Pennsylvania’s McKean County. With guidance from the Wildlife Management Institute and funding from the Wildlife For Everyone Endowment Foundation, conservationists planted 12,400 seedlings in 2015, the project’s sixth year. The planting is part of an ongoing effort to improve wildlife habitat and to monitor wildlife populations, including the American woodcock and other young forest species.

Pennsylvania’s Department of Conservation and Natural Resources (DCNR) recently acquired the 27-square-mile property, which will be added to the adjacent Elk State Forest. The Clermont Tract represents the largest addition to the state forest system in 65 years.

Wildlife habitat in the area was dramatically altered due to logging and agricultural practices across northern Pennsylvania in the mid-1800s and again early in the 20th century. Cutover uplands eventually regenerated as northern hardwood forests dominated by black cherry. However, several thousand acres of wet meadow sites never fully regenerated.

Natural resources professionals have concentrated habitat-creation efforts on those grass-bound meadow sites. Seedlings planted in the past five years, especially 2013 and 2014, are now showing enough growth to reach maturity. Juneberry, mountain ash, arrowwood, elderberry and viburnum are also beginning to grow. Seedling planting and fencing along with adequate deer harvests will help restore much of the area as excellent, diverse habitat.

In the past year, four new locations, known locally as Hoffman Farm, Jacobson Farms, Hagman Farms and Larson Farms, were added to the planting areas. The old farms had been abandoned in the 1930s or earlier, and, due to deer browsing, many openings remained devoid of woody growth. In recent years, with a reduced deer population, some cherry, birch and maples along with native Juneberry had started to reclaim the old fields. This year, conservationists planted a variety of seedlings and shrubs to complement the natural cycle.

Work on the Clermont Tract in 2015 included applying lime to seedlings from prior years’ plantings; laying out sites for five fenced enclosures to protect planted and natural native seedlings from deer browsing; obtaining fencing from the Pennsylvania Game Commission; preparing fenced sites and scarifying soils for planting shrubs; documenting local snowshoe hare populations; and collecting hare and rabbit pellets to investigate the possible existence in the area of the rare Appalachian cottontail.

Funding for this year’s work came from a grant from the Ruffed Grouse Society and a local donor. RGS volunteers also helped with tree and shrub plantings.

To purchase the land, the state invested $7.2 million, which came from mitigation payments for rights-of-way and other transactions. The Western Pennsylvania Conservancy, a non-profit organization that focuses on enhancing the region’s quality of life by protecting and restoring exceptional places, facilitated the purchase with additional funds from the Richard King Mellon Foundation.

The seller, Forest Investment Associates, will retain timber rights for 35 years and will continue harvesting timber, supporting local forest management companies and sawmills under an agreement that requires sustainable forest management practices. Timber rights will revert to DCNR in the future, ensuring that the Clermont Tract will be carefully managed for the health of the forest and to support jobs in northern Pennsylvania’s forest products industry.

Article by the Young Forest Project.