Posted on Tuesday, May 9th, 2017 by aadmin | Comments Off on Life After Coal: Appalachian Wildlife Center 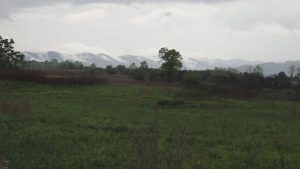 The people of Appalachia have been forced to imagine life after coal. Wildlife biologist David Ledford found that it isn’t all bad.

While working on wildlife restoration, Ledford discovered stunning views and a paradise for bird watchers at former coal mining sites in Bell County, Kentucky. He and his business partner, Frank Allen, came up with the idea to use the reclaimed lands as an educational wildlife center to teach students about coal, nature, and wildlife.

“There’s some value here from a wildlife habitat perspective. It’s a value that a lot of people don’t know about and it doesn’t get recognized,” Ledford said.

The partners bought what was supposed to be an industrial park that never attracted any industry and then leased another 12,000 acres from Asher Land and Mineral Company. By 2019, they plan to open the Appalachian Wildlife Center on the property where the first two mountain-top removal mines in Eastern Kentucky are located.

Ledford has a vision that includes a museum of natural and regional history, theater, and restaurant on site.

“We’re going to have a 15 to a 20 mile loop road, like Cade’s Cove. You’re going to come here and see deer, bears, and a bunch of birds. But also elk, hundreds of elk, in just a few years, picnic areas, walking trails, and interpretive signs,” he said.

“It is estimated within 5,6,7 years there will be there will be half a million people, 600,000 people year that will be able to come,” said Governor Bevin (R-Kentucky), “I think if we take full advantage that’s just beginning to scratch the surface.”

The economic impact studies show the influx of visitors could bring in as many as 2,000 jobs in five years. It’s welcome news for an area desperate for jobs.

Diversification has not been easy. Ledford said the landscape and loose, rocky terrain that comes with reclaimed mines makes it difficult to recruit industry.

Ledford hopes this will be the eco-tourism boost they need to bring new life in an old mine.