Life after Hemlock: Restoring Riparian Forests in the Southern Appalachians

Posted on Monday, December 7th, 2015 by aadmin | Comments Off on Life after Hemlock: Restoring Riparian Forests in the Southern Appalachians 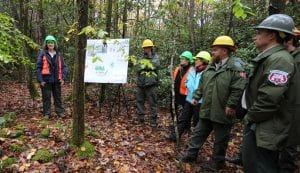 In the last decade, the hemlock woolly adelgid, a tiny sap-sucking insect native to Japan, has swept through southern Appalachian forests, leaving dead hemlocks in its wake. Hemlock branches no longer shade streams or tower over shrubs, and their loss has affected streamside, or riparian, forests.

“Without hemlock, more sunlight reaches the forest floor,” says U.S. Forest Service scientist Chelcy Ford Miniat. The species that has benefited the most from the increased light is an evergreen shrub, rosebay rhododendron (Rhododendron maximum), which is now growing twice as fast as expected. Although rhododendron’s showy flowers are appreciated by nature-lovers, its unchecked growth in riparian forests is not so welcome. Evergreen rhododendron grows so densely that flowering plants, ferns, and seedlings are unable to survive beneath its shade. It also stores essential plant nutrients in its leaves for years, and when the leaves fall off and fragment, they decompose very slowly and nutrients remain locked up in forms that are inaccessible to other plants.

SRS scientists and managers from the U.S. Forest Service Nantahala Ranger District worked closely to plan treatments  for study sites in the Coweeta Basin and in the White Oak Creek watershed northwest of Coweeta. Treatments include removing only the rhododendron canopy (by cutting the shrub down and moving it off the plots); removing only the litter and humus layer on the forest floor (by conducting a prescribed fire); removing both the canopy and forest floor (by cutting the shrub down and leaving it onsite until a prescribed fire can be conducted); and an untreated control. Rhododendron was removed over the summer, but the prescribed fires had not been conducted at the time of the workshop.

“Before treatment, rhododendron and dead hemlock trees dominated the study sites,” says Miniat. “After the treatments are complete, we expect to see more diverse vegetation.” Hardwood trees like black birch, red maple, oaks, and tulip poplar are scattered above the rhododendron sub-canopies, but there are very few tree seedlings, ferns, grasses, or flowering plants.

Although there were some viable tree seeds in the soil, rhododendron-dominated areas tend to have very few seeds of herbaceous plants in the seedbank. It could take years for some herbaceous species to colonize forests previously dominated by rhododendron. However, the treatments have already led to increased light on the forest floor, higher soil temperatures, and more available water in the soil – resources that can help seedlings and herbaceous plants recolonize and grow.

Because rhododendron retains carbon and nitrogen in its leaves, which decompose slowly, scientists expect that removing rhododendron will accelerate the nutrient cycle and make nutrients more available to other plants. “As nutrient cycling in the soil increases, the nutrient concentration in streams may also increase,” says Elliott.

Scientists are monitoring many aspects of stream health, including temperature, pH, nutrient levels, algal growth and populations, insects, and crayfish abundance. Streams in the study area are small, cold, and inhabited by temperature-sensitive fish species like brook trout and sculpins. Streams in the treated sites have stayed cold enough for these species, probably because the remaining trees still provide shade.

The study will also monitor migratory bird populations and evaluate salamander response. The early findings indicate that restoring balance between rhododendron and other plants will help forests to be healthier and more diverse.

Article by the U.S. Forest Service.