Posted on Wednesday, August 21st, 2013 by aadmin | Comments Off on Military Move to More Lead-Free Ammunition Could Save Millions of Birds 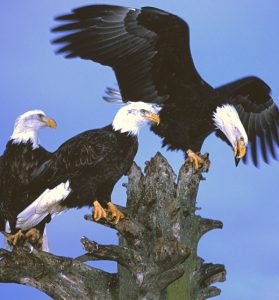 The recent decision by the United States military to move to a non-lead version of their 7.62 mm bullet could prompt voluntary changes in hunting practices, potentially saving millions of birds in the United States from ingestion of spent lead ammunition, says George Fenwick, President of American Bird Conservancy, one of the country’s leading bird conservation organizations.

ABC is encouraging the hunting community to voluntarily switch from traditional lead-based ammunition in favor of non-lead alternatives based on hundreds of peer-reviewed studies showing that millions of birds are poisoned every year following ingestion of either shotgun pellets mistaken for grit or seeds or lead particles left in gut piles following hunts. Among the birds most impacted are: Bald Eagles, hawks, vultures, California Condors, and Mourning Doves.

Fenwick added that the military’s voluntary conversion to non-lead ammunition may eventually blunt the most common concern about non-lead ammunition: the cost. “The quantities of ammo required by the military will no doubt require that ammo producers acquire the new equipment to not only produce non-lead ammo, but also produce it in large quantities at much lower costs,” he said. “This is a game-changer because it provides a signal to the ammunition manufacturing industry that the non-lead market is increasing, and provides some assurances that necessary capital investments will be safe financial risks,” he added.

The switch to non-lead 7.62 mm bullets follows another military ammunition switch in 2010, which converted the 5.56 mm to a non-lead bullet. The switch to the 5.56 mm non-lead bullet eliminated nearly 2,000 tons of lead from the environment. Future projections of the new non-lead round estimate that its use could result in an additional 4,000 tons of lead being eliminated from ammunition production. The military’s new 7.62 mm non-lead ammunition is expected to be used starting in 2014.

Article was produced by the American Bird Conservancy.