Posted on Thursday, June 1st, 2017 by aadmin | Comments Off on New Grants Awarded to Protect Lands and Birds 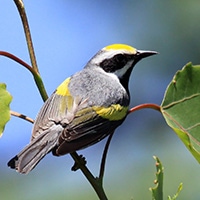 “By providing much needed funding to land trusts, together, we can help build capacity to succeed with projects that create partnerships and preserve birds and habitat on private lands,” says Sara Barker, leader of the Cornell Lab’s Land Trust Bird Conservation Initiative.

The Cornell Lab received nearly 80 proposals for the grants, which were established specifically to bring attention to strategic conservation for birds. Loss of habitat is one of the most severe threats that  birds face and land trusts contribute greatly to protecting and managing important habitats.

“When it comes to conserving private lands, land trusts are leaders and play an increasingly important role in conserving birds and biodiversity in North America,” says Amanda Rodewald, the director of conservation science at the Cornell Lab.

Below are details for each of the funded land trust proposals:

The Central Colorado Conservancy will use funds to start a program, using citizen-science data from eBird.org, to monitor Lewis’s Woodpecker. According to the North American Breeding Bird Survey, the Lewis’s Woodpecker population declined by about 82 percent between 1966 and 2015. “We’ll use the observation data on the woodpecker to identify high priority habitat to target for conservation,” says the Conservancy’s Andrew Mackie. “This old-growth riparian habitat used by Lewis’s Woodpecker is also critical for other species, such as small mammals, migrating songbirds, and fish.”

Funds awarded to the Columbia Land Trust will be used to develop the East Cascades Oaks Partnership to both raise awareness of the highly threatened Oregon white oak habitat and engage stakeholders and the public in discussions about the science and management of the unique ecosystem. White oak ecosystems support a wide variety of birds and wildlife, especially Neotropical migratory songbirds. “A strategic, collaborative conservation effort will help preserve the connectivity, diversity, quality, and extent of white oak habitat,” says Columbia Land Trust’s Lindsay Cornelius. “We also want to help to reform damaging management practices.”

Kennebec Estuary Land Trust has earmarked grant funds to expand and strengthen a bird monitoring program on its preserves in the region. “We want to create a volunteer bird monitoring program, plus increase and promote the use of the eBird online observation program in the Kennebec Estuary region,” says Becky Kolak of the land trust. Overall, trust leaders say the funds will enable them to make bird conservation a more prominent objective in their land acquisition and management decisions.

Another round of grants from the Cornell Lab through the Land Trust Bird Conservation Initiative will be available next year, with proposals due in spring 2018. To learn more about how to apply for a grant, visit the initiative website at birdtrust.org.