Posted on Tuesday, July 21st, 2015 by aadmin | Comments Off on New Insights into Demographic Causes of Bird Population Declines 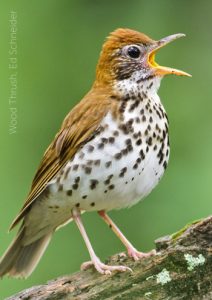 A new website unveiled by The Institute for Bird Populations (IBP) provides unprecedented estimates of the vital rates of over 150 species of North American landbirds and will significantly improve strategies for reversing the population declines that are occurring in many of these species.

Vital Rates of North American Landbirds provides estimates of the annual rates of survival, reproduction, recruitment, and population change for each of the 150 species. The data is based on analyses of hundreds of thousands of bird banding and recapture records collected over a 15-year (1992-2006) period across the U.S. and southern Canada by the Monitoring Avian Productivity and Survivorship (MAPS) program, which IBP developed and continues to coordinate.

By examining the estimates of these critical vital rates and the annual and geographic relationships among them, the website identifies the extent to which population changes in these species are driven by factors affecting productivity, which occurs during the spring and summer breeding season, versus factors affecting mortality, which primarily occurs during the non-breeding season.

“This website expands upon the results of the largely count-based efforts that monitor the relative abundance and population trends of landbirds and that have been invaluable for identifying conservation targets and priorities. By providing estimates and analyses of the vital rates, essentially the birth rates and death rates, which actually drive the population trends revealed by count-based monitoring, the website provides more direct information on the demographic causes of population trends and the drivers of annual and geographic variation in those trends,” said Dr. David DeSante, President and founder of IBP and the MAPS program.

“The information presented on the website allows identification of where and when in the annual life cycle of these species the vital rates are exerting their effects and thus, where and when the populations are being limited. Determining the vital rates that are the likely drivers of avian population change is critical for informing effective conservation because management can then be directed at the annual-cycle stage that actually limits the population.

This is especially important for migratory species that breed in temperate areas of North America but spend the winter in the tropical areas of Mexico, Central and South America, and the West Indies, because it tells us where we should focus our limited conservation resources. Understanding the contribution of the various vital rates to the population declines exhibited by many landbird species not only has important conservation implications, it is also fundamental to our basic understanding of avian population dynamics,” DeSante said.

The website, for example, shows how estimates for two important vital rates of Wood Thrush — a beloved songbird characteristic of eastern deciduous forests — provide clues to the cause of the species’ severe and widely documented population decline. The average adult apparent survival rate was extremely low, much lower than the average survival rates for three other closely related thrush species with stable or much less severely declining population trends, while the average reproductive index was slightly higher than the average reproductive indices of those other three thrush species. These results suggest that low adult survival, rather than low productivity, may be the primary demographic driver of the Wood Thrush population decline. Moreover, the annual and geographic patterns in population change much more closely resembled (i.e., were much more highly correlated with) the analogous patterns in adult apparent survival than the patterns in productivity, thus providing further confirmation that low survival has driven the population decline

“While it appears that survival of either adult or young birds, or both, is often the most important demographic limiting factor for Neotropical wintering migratory species,” said DeSante, “productivity also appears to be an important factor for some species.” Townsend’s Warbler, for example, a Neotropical-wintering migratory species with a stable population trend, appears to be limited primarily by productivity, while Orange-crowned Warbler, a declining species, appears to be limited both by adult survival and productivity.  In addition, the factors driving annual variation in population changes often differ from the factors driving geographic differences in population trends. Species account narratives on the website discuss the results for each species and provide suggestions for research, habitat management, and conservation efforts to reverse declining populations and maintain stable or increasing populations.

“Anyone concerned about bird conservation will find significant value in this website. This is an outstanding resource for use by federal and state decision makers and a host of NGOs in their joint efforts to reverse the increasingly serious reality of diminishing populations facing many avian species,” said Dr. George Fenwick, President of American Bird Conservancy, one of the nation’s leading bird conservation groups. “This information will be critical in helping shape bird conservation programs being developed by American Bird Conservancy and its partners and is a central piece in the data jigsaw that has been largely missing until this point,” he added.

Avian conservation partnerships, such as Partners In Flight (PIF) and the North American Bird Conservation Initiative (NABCI) have recently recognized the importance of implementing full-annual-cycle monitoring and management of bird populations, and both partnerships have implemented initiatives addressing those needs.

The MAPS program that produced the 15-year dataset that formed the basis for the website utilizes a standardized protocol of mist netting and bird banding and state-of-the-art capture-mark-recapture analytical techniques. It consists of a network of over 1,200 bird-banding stations across North America that operate during the May-to-August landbird breeding season; an average of more than 400 stations have been operated annually. About 20 percent of MAPS stations have been operated by IBP biologists and trained interns, while the remaining 80 percent have been operated by independent licensed bird banders, making MAPS one of the largest and most highly trained citizen science efforts anywhere in the world.

« Through Partnerships, Golden-Winged Warbler Thrives
Should You Hire a Consultant? »