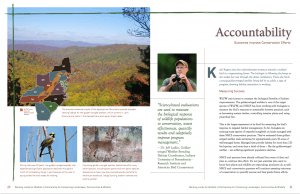 From ranchers in the West to forest managers in the East, private landowners are voluntarily conserving habitat for wildlife, helping species rebound and recover. One such success highlighted in this new magazine from the Natural Resources Conservation Service is happening in the Appalachians with the Golden-winged Warbler.

Karli Rogers aims her radio-telemetry antenna towards a marked bird in a regenerating forest. The biologist is following the beeps as she makes her way through the dense understory. There she finds a young golden-winged warbler being fed by an adult, a sign of progress, showing habitat restoration is working.

Working Lands for Wildife (WLFW) uses science to measure the biological benefits of habitat improvements. The golden-winged warbler is one of the target species of WLFW, and NRCS has been working with biologists to measure the bird’s response to sustainable forestry practices, such as harvesting mature timber, controlling invasive plants and using prescribed fire.

This is the largest assessment of its kind for measuring the bird’s response to targeted habitat management. So far, biologists are noticing many species of imperiled songbirds on lands managed with these NRCS conservation practices. They’ve estimated three golden- winged warbler male territories for approximately every 50 acres of well-managed forest. Managed sites provide habitat for more than 120 bird species, and more than a third of those – like the golden-winged warbler – are suffering significant population declines.

NRCS and partners have already collected four years of data and plan to continue this effort. It’s not just scientists who want to know how plants and wildlife are responding, producers do as well. NRCS and conservation partners will continue assessing outcomes of conservation to quantify success and best guide future efforts.