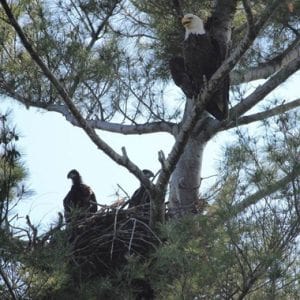 “Early indications from 2017 aerial surveys have revealed that approximately 73 percent of bald eagle territories are occupied this year,” Commissioner Seggos said. “New York State has been a leader in the restoration and recovery of the bald eagle in the northeastern United States, and this news confirms that our rivers, lakes, and forests are capable of supporting our nation’s symbol for generations to come.”

While exact estimates will be determined over the course of the breeding season as biologists compile ground reports and surveys, the current breeding bald eagle population is estimated to be 323 breeding pairs, which would set a new record.

A record number of 53 new nesting territories were verified in 2016, increasing the total number of breeding territories in New York State to 442. Nesting territories are areas known to be occupied by bald eagles and are the locations included in DEC survey and monitoring efforts. Of these 442 territories, 309 (70 percent) were confirmed to host breeding pairs of eagles last year.

This is an increase from the previous record high in 2015, when across 389 territories, 264 (68 percent) nesting pairs of eagles were documented. The number of territories has been steadily increasing each year. Since 2010, DEC has documented at least 20 new territories a year.

Bald eagles, once found throughout the state, were nearly eliminated by the late 1960s, primarily due to the effects of DDT on nesting success and habitat loss along the shorelines of New York’s lakes and rivers. In 1970, the state hosted a single unproductive bald eagle nest on Hemlock Lake in Livingston County. To reestablish a small breeding population in New York State, DEC started a “hacking” program in 1976, which involves hand rearing and releasing older nestlings in the absence of parent birds. New York was able to obtain nestlings from healthy populations of bald eagles in Wisconsin, Minnesota, Michigan, and Alaska.

Over a 13-year period, 198 bald eagle nestlings were collected from areas with healthy populations, raised to independence with minimal human contact, and released in New York. The hacked eagles flourished and many of them returned to New York to nest and breed. The hacking program concluded in 1988 after surpassing its original goal of 10 nesting pairs of bald eagles in New York. The program was so successful that 16 other states and the Province of Ontario followed New York’s lead and instituted their own hacking programs to restore the species.

Although New York’s bald eagle restoration program ended in 1989, the State’s ‘s eagle population has continued to grow, with birds nesting and wintering in traditional areas and taking advantage of open lands and habitats acquired with funding from the State’s Environmental Protection Fund. Governor Andrew M. Cuomo sustained the EPF at a record high $300 million for the second year in a row.

Public reports also play a crucial role in assisting DEC to assess the status of this iconic species. Current aerial survey routes cover approximately 50 percent of known territories and allow DEC to rapidly determine the nesting activity from more than 200 nesting locations. These surveys follow the same route from year to year, allowing DEC to track the presence of nesting eagles at territories across the state and detect changes in the breeding eagle population over time. Additional data comes to DEC from a network of volunteers who provide reports on the status of observed nests. This input allows DEC to develop an overall count of nesting pairs.

DEC encourages the public to continue to chronicle the conservation success story of bald eagles in New York. Members of the public that have found a new nesting pair of eagles or can provide updates on the status of a nesting pair, should contact DEC at (518) 402-8957 or by email at fw.information@dec.ny.gov. Reports from the public will help DEC keep track of where eagles are and how those eagles are doing.

For more information on bald eagles and how DEC manages the species, please visit the DEC website to view the Conservation Plan for Bald Eagles in New York State.