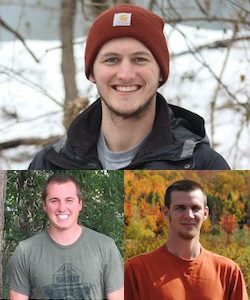 New staff positions are being filled that will help implement contracts with private landowners and conduct critical forest management for the Cerulean Warbler Appalachian Enhancement Project. These positions so far include a project coordinator in West Virginia and two Pennsylvania Field Foresters. Each new member will work in close partnership with state and federal agencies to promote habitat management for Cerulean Warblers on private lands via technical assistance and outreach. A project coordinator in Pennsylvania will also come on board in the next couple of months.

Kyle Aldinger joined the AMJV as our new West Virginia Cerulean Warbler Partnership Coordinator.   Kyle is employed by the National Wild Turkey Federation (NWTF) through a cooperative agreement between NWTF and American Bird Conservancy (ABC).  Kyle will be working in close partnership with the WV NRCS, the Appalachian Mountain Joint Venture, WV DNR and Forestry, and the USFWS to promote habitat management for Cerulean Warblers on private lands via technical assistance and outreach. Kyle earned his B.S. degree in Environmental Studies; Fisheries and Wildlife Biology from California University of Pennsylvania in May 2007 and subsequently completed his M.S. degree in Wildlife and Fisheries Resources from West Virginia University (WVU) in 2010.  Kyle studied ecology, management, and survey methodology of Golden-winged warblers, which have habitat needs that parallel Cerulean warblers. In addition, Kyle began pursuit of his Ph.D. in Forest Resource Science: Wildlife and Fisheries Resources at WVU in 2010 for which his research involved studying ecology and management of Golden-winged warblers and associated species.  Kyle resides in the Morgantown, WV area and will work out of the Morgantown NRCS office.

Slater Hafer is also coming on board as a Pennsylvania Field Forester. Slater received his B.S. in Forest Resource Management from West Virginia University in 2014.  While working on his degree, he also worked for the Maryland Forest Service as a Natural Resources Technician at Potomac Garrett State Forest.  Prior to joining the AMJV, he was with Indiana University of Pennsylvania as a Golden-winged Warbler Forester for private landowners as part of the NRCS Working Lands for Wildlife (WLFW) program.

Kevin Yoder joined the AMJV team as a Pennsylvania Field Forester. Kevin has a B.S. in Wildlife and Fisheries Science from Penn State University in 2009. Before his current role, he was a project biologist/forester for National Wild Turkey Federation (NWTF), where he provided landowners technical assistance for creating young forest habitat for Golden-winged Warblers as part of the NRCS Working Lands for Wildlife (WLFW) program. He has also worked as a consulting forester to fulfill various forest management practices contracted through NRCS.

In January, the AMJV partnership received an $8 million Regional Conservation Partnerships Program award for it Cerulean Warbler Appalachian Forestland Enhancement Project. This project will allow partners to work with private landowners to enhance 12,500 acres of forest habitat on private lands for Cerulean Warblers and other wildlife, demonstrating the benefits of active forest management for conserving priority species. Approximately 1,000 acres of reclaimed mine lands will also be restored to forestland, including planting 5000 blight-resistant American Chestnuts donated by The American Chestnut Foundation.