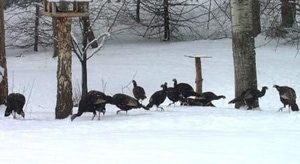 “Wild turkeys are the most popular small game species in New York among hunters afield,” Commissioner Martens said. “The data generated by this study will provide valuable information on turkey survival rates and population size to help guide future management of this important game species. I encourage landowners that have wild turkey on their property to consider participating in this study.”

Over the past 10 years wild turkey populations have declined in many parts of New York State. In an effort to better understand the factors influencing population changes and how these changes affect turkey management, DEC is embarking on a four-year study. This project will provide wildlife managers with current estimates of harvest and survival rates for female wild turkeys, or hens, in New York and guide future management efforts.

Beginning in January 2013, DEC will launch a statewide effort to capture wild turkey hens and fit them with leg bands to obtain accurate data on survival and harvest. A small number of these birds will also be tagged with satellite radio-transmitters. All of the work in New York will be done by DEC personnel on both public and private lands from January through March. The research will be concentrated in DEC Regions 3 through 9 where turkey populations are largest.

From 2006 through 2009, DEC staff worked with hundreds of landowners from across the state to assess harvest and survival of gobblers, male wild turkeys. Many landowners actively participated in the gobbler survival project or provided reports of winter turkey flocks. With that important project completed, DEC is once again looking for landowners interested in helping with the new study focused on hen survival.

DEC is looking for landowners in DEC Regions 3 through 9 interested in allowing birds to be trapped on their land, as well as alerting project coordinators when they see turkeys on their property on a regular basis. Once turkeys are trapped and banded, they will immediately be released unharmed at the same location. Observations of turkey flocks during January through March can be reported to the project coordinator for that region or can be reported using the Winter Flock Survey form found on DEC’s website.

This release was produced by the New York Department of Environmental Conservation.