No Cause for Alarm: Prescribed Burns Benefit Wildlife and Habitat

Posted on Wednesday, January 18th, 2017 by aadmin | Comments Off on No Cause for Alarm: Prescribed Burns Benefit Wildlife and Habitat 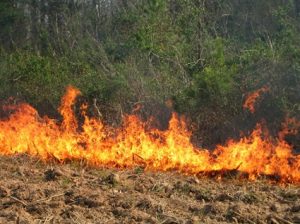 In January, North Carolina residents may start to see smoke in the vicinity of N.C. Wildlife Resources Commission game lands. What they’re witnessing is usually a prescribed burn—one of the most beneficial and cost-effective methods of managing habitat for wildlife.

A prescribed burn is an intentional burning of vegetation that the Commission employs to restore and maintain wildlife habitat on most of the 2 million acres of state game lands used by hunters, anglers and wildlife watchers throughout North Carolina.

Optimal conditions for a prescribed burn occur on cool-weather days with moisture in the air and minimal wind. The Commission’s burn season typically runs January through March. Some burns, however, are conducted into spring and summer, as warm season burning provides for better control of young hardwoods in certain habitats.

Many of North Carolina’s declining or rare wildlife species, such as the red-cockaded woodpecker, are adapted to fire or found only in fire-dependent habitat. Commission staff typically conducts maintenance burns in multi-year cycles to open groundcover for quail, grassland birds, deer and turkeys. Burning encourages production of native grasses and herbaceous vegetation, which provides valuable food and cover for a wide variety of wildlife species. Prescribed burns are also used to help reduce high levels of forest fuels (such as leaf litter and pine straw) that can cause deadly wildfires and to control disease and insects.

The Commission regularly gets calls from people who are concerned about animals not being able to escape the fire, particularly during turkey hunting season in the spring.

“Fire is a natural occurrence that animals have adapted to,” said Isaac Harrold, the Commission’s lands program coordinator. “But we go further to protect the native wildlife by using burning techniques that ensure animals have time and room to escape. After an area is burned, we typically see new vegetation within a few weeks, which means the animals won’t be far behind.”

« OSMRE: $180 Million in Funding Availability for Coal Mine Reclamation
Griffin Groups is Coming Back »