North America United by its Birds to Secure Vital Habitats

Posted on Thursday, May 19th, 2016 by aadmin | Comments Off on North America United by its Birds to Secure Vital Habitats 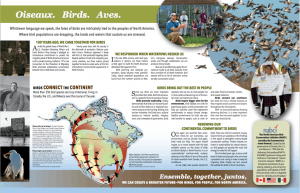 The North American Bird Conservation Initiative (NABCI) published today The State of North America’s Birds 2016, the first comprehensive report assessing the conservation status of all bird species that occur in Canada, the continental United States, and Mexico. The report was released by NABCI partners at the Museum of Nature in Ottawa, Canada, on behalf of all three countries, with a simultaneous event at the Canadian Embassy in Washington, DC, in partnership with International Migratory Bird Day. NABCI was created by Canada, the United States and Mexico as a tri-national commitment to protect birds and their habitats.

“This report will allow us to base conservation actions on the best available science on the status of birds and their habitats in North America,” said Environment and Climate Change Canada Minister Catherine McKenna. “It is an unprecedented continental analysis, drawing on the efforts of tens of thousands of citizen-scientists from Canada, the U.S., and Mexico.”

This report shows that more than one third of all North American bird species need urgent conservation action and calls for a renewed, continent-wide commitment to saving our shared birds and their habitats. One example of urgent conservation action taking place is in temperate forests, where the Appalachian Mountains Joint Venture is planning for a mix of forest types from New York to Alabama. By integrating bird conservation objectives into forest management plans, it will diversify habitats across the eastern U.S.

Healthy environments for birds also provide benefits to other wildlife and people, such as clean air and water, flood and erosion control, and coastal resilience. When bird populations struggle, our natural resources are stressed.

Birds in ocean and tropical forest habitats are in crisis.  More than half of the bird species in these ecosystems are on the Watch List, which designates species that are most at risk of extinction without significant action.  Small and declining populations, small ranges, and severe threats to their habitats threaten species in these two habitats; for example, ocean pollution and invasive species on islands are problematic for ocean birds, while deforestation is a major challenge for tropical forest birds.  Steep population declines also threaten birds in coastal, aridland, and grassland habitats.  In particular, long-distance migratory shorebirds and species that migrate from the Great Plains of Canada and the U.S. to Mexico’s Chihuahua grasslands have lost, on average, almost 70 per cent of their continental populations since 1970.

Despite the many challenges faced by North American birds, this report also shows that conservation works.  Waterfowl and other waterbirds are doing well, thanks in part to effective investment in conservation of wetlands through programs like the Duck Stamp, which allows hunters and other wildlife enthusiasts to contribute funding to purchase and protect wetland habitat, and the North American Waterfowl Management Plan, a tri-country initiative to coordinate waterfowl protection efforts.  Continued investment in wetlands conservation is needed to ensure that waterbirds will continue to thrive- and ensure that clean water exists for all species, including humans.

The report evaluates the conservation status of all native North American bird species across all major habitats —nine key ecosystems.  It is based on the first-ever conservation vulnerability assessment for all 1,154 native bird species that occur in Canada, the continental U.S., and Mexico, and reflects a collaboration between experts from all three countries.  The overall conservation status of each species takes into account its population trend, population size, extent of breeding and nonbreeding ranges, and severity of threats to populations.  Methodology information, the complete assessment database, animated maps and other resources are available at stateofthebrids.org.

“This report is a superb demonstration of the power of birds, and the growing power of citizen science. Tens of thousands of Canadians, Americans, and Mexicans contributed bird sightings to help produce an unprecedented continent-wide assessment of North America’s birds,” added Dr. John W. Fitzpatrick, Executive Director of the Cornell Lab of Ornithology. “Because birds are sensitive barometers of environmental health, I encourage leaders across our three nations, in both government and industry, to consider the findings in this report, which is based on the best available science about our bird populations. Across the continent, it is the will of the people that these species and their habitats be conserved for the future.”

The State of North America’s Birds Report is being released during the Centennial year of the Migratory Bird Treaty, an agreement between the United States and Canada that promised collaborative conservation to protect the migratory birds of North America.  In 1936, twenty years after the signing of the Migratory Bird Treaty, Mexico and the U.S. committed to a similar treaty, connecting all of North America in its efforts to protect our shared species.  This report reflects a groundbreaking collaboration to evaluate bird populations across the continent. It calls for a renewed commitment to continental bird conservation agreements to keep our shared birds safe and healthy for the next 100 years.

About NABCI
The North American Bird Conservation Initiative (NABCI) was created by the governments of Canada, the U.S., and Mexico in 1999 after the diplomacy that produced NAFTA.  The NABCI agreement recognized birds as an international “natural economic resource.”  NABCI is a trinational commitment to protecting, restoring, and enhancing populations and habitats of North America’s birds—with an integrated vision for “all birds and all habitats.”
For more information, please visit: http://www.nabci-us.org/