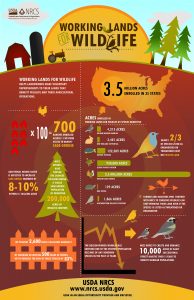 Working Lands for Wildlife is a partnership between USDA’s Natural Resources Conservation Service and the U.S. Fish and Wildlife Service that helps producers make voluntary improvements to their lands that benefit wildlife and their agricultural operations. Millions of acres of habitat for these species were created or managed through this and other similar NRCS-led efforts.

This includes work on private and public lands in the Appalachians to create and enhance 18,000 acres of young forest habitat for the imperiled Golden-winged Warbler. Other conservation activities range from reviving longleaf pine ecosystems for gopher tortoises in the Southeast to restoring stream banks essential to the Southwest willow flycatcher.

“Landowners are true conservation heroes, and NRCS is here to help them improve sustainability of their working lands that provide habitat for nearly two-thirds of all imperiled species in the United States,” said NRCS Acting Chief Jason Weller.

Through NRCS, landowners can receive technical and financial assistance to employ conservation practices and improve these species’ habitats.

“Farmers and ranchers who voluntarily maintain conservation practices that benefit these species may also receive regulatory predictability for up to 30 years, providing peace of mind that they are in compliance with the Endangered Species Act, even if the species is federally protected,” said Tim Griffiths, Sage Grouse Initiative coordinator.

“This creates a win-win opportunity for the landowners as these practices improve their operations’ long-term sustainability, providing them the opportunity to remain profitable into the future,” said Jon Ungerer, coordinator for the Lesser Prairie Chicken Initiative.

Since the start this partnership and other similar efforts, landowners in 35 states enrolled about 3.5 million acres in conservation practices to improve these species’ habitat. More than 2.5 million acres of those were enrolled in the Sage Grouse Initiative. Known for its mating dance, the sage grouse is a Western icon.

Ranchers across the West are actively reducing the threats to the sage grouse habitat, including a fence-marking initiative that decreased the sage grouse’s death from running into barbed wire fences by 83 percent. They are also helping the grouse and other sagebrush wildlife species by improving rangeland health.

Landowners in the Southeast are helping restore the habitat for the gopher tortoise, the keystone species of the longleaf pine ecosystem. About 360 other wildlife species depend on tortoises and their burrows.

For example, Florida landowner Steve Barlow owns 80 acres of slash pine forest and pasturelands, and he used conservation practices to restore the land into a vibrant longleaf pine forest. Longleaf forests, if managed, boast a robust understory that provides food and cover for a variety of wildlife, including the Sherman’s fox squirrel and northern bobwhite quail.

In addition to the wildlife benefits, these conservation activities also help the environment as a whole.

By establishing native groundcover plants such as wiregrass, silk grass and partridge pea to increase plant diversity, Barlow is creating a landscape that will serve as a filter for water that eventually flows to the Gulf of Mexico, removing excess nutrients.