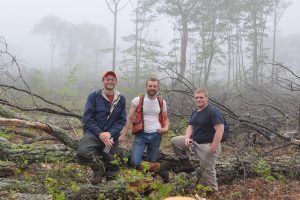 During 2012 and 2013, this partnership reached out to over 6,500 private forest owners. Ultimately, this outreach and increased on-the-ground capacity resulted in 1,652 acres of Golden-winged Warbler breeding habitat enrolled in Natural Resources Conservation Service-Working Lands for Wildlife in 2012, and 4,053 acres enrolled in 2013. This allowed Pennsylvania to account for more than 81% of all Golden-winged Warbler breeding habitat acres enrolled across the nine Appalachian states eligible to participate in the WLFW program. In the first two years, this partnership has enrolled a total of 5,705 acres belonging to 122 private land owners.

From 2011-13, the partnership has accounted for over 32,000 acres of potential Golden-winged Warbler habitat on Pennsylvania’s public lands. These included areas managed by the Pennsylvania Game Commission (12,503 acres) and DCNR-Bureau of Forestry (20,900 acres). Additionally, the partnership created the first ever Golden-winged Warbler Cooperative Management Area (GWCMA) located in northeastern Pennsylvania. The Management area is comprised of 60% private lands and 40% public lands (State Game Lands and the Delaware State Forest). The partnership works closely with public land managers and private forest owners to demonstrate successful landscape-scale conservation implementation that transcends ownership boundaries.

The Initiative was one of seven recipients in the nation to receive a JV Conservation Champions Award. This national award is given to partners and partnerships that have demonstrated a long-term commitment and dedication to the important work of the Joint Ventures in conserving habitats for birds and other wildlife, leveraging resources, developing cutting-edge research to fill gaps in knowledge, and guiding resource management action through science-based planning.