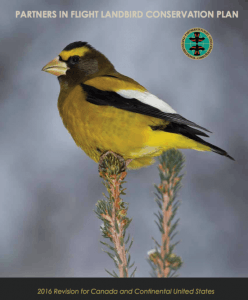 Scientists Document Widespread Declines, Urgent Need for Conservation of Landbirds in U.S. and Canada. Report calls for unprecedented partnerships across public and private sectors to reverse trends throughout bird’s life-cycles.

A new analysis of the population status and trends of all landbirds in the continental U.S. and Canada documents widespread declines among 450 bird species—a troubling indicator of the health of these species and their ecosystems. Nearly 20% of U.S. and Canadian landbird species are on a path towards endangerment and extinction in the absence of conservation action, according to the Partners in Flight (PIF) 2016 Landbird Conservation Plan Revision.

Fortunately, the new bird conservation landscape includes unique private-public partnerships, such as Migratory Bird Joint Ventures, that stretch across the U.S., and parts of Canada and Mexico and pool together resources and leverage funding to conserve habitat for all bird species. Such partnerships can help implement cooperative strategies found within the Landbird Conservation Plan Revision to restore habitats and reverse bird population declines at the continental scale over the next decade and beyond.

“Birds and their habitats face unprecedented threats from climate change, urban growth, and a widespread decline in habitat quantity and quality,” said Jerome Ford, Assistant Director of the U.S Fish and Wildlife Service’s Migratory Bird Program. “Although much progress has been made over the past 20 years, the task of conserving several hundred landbird species across vast and varied landscapes under diverse ownership requires unprecedented levels of cooperation, coordination, and planning.”

The steepest recent declines are seen in grassland birds, species of aridland habitats such as sagebrush and desert scrub, and forest species dependent on sustainable forest management or natural disturbance. PIF estimates that breeding landbird populations have been reduced by over a billion individuals since 1970. Among 86 Watch List species – landbirds of highest conservation concern – 22 have already lost at least half of their population in the past 40 years and are projected to lose an additional 50 percent of their current population within the next 40 years. For at least six species, this “half-life” window is fewer than 20 years.

“The window for reversing declines and preventing listings is narrower than we originally thought,” said Dr. Ken Rosenberg, Applied Conservation Scientist at the Cornell Lab of Ornithology. “We must start implementing conservation actions across the full life-cycle of birds in order to address threats that are resulting in these rapid declines.”

The Plan presents new science using year-round eBird data to assign stewardship responsibility, identifying regions of greatest importance to landbirds during winter and migration. The Plan also recommends specific actions to guide landbird conservation over the next 10 years to reverse long-term population declines, prevent future species listings, and keep common birds from becoming highly threatened or at risk. Many of these recommendations – from supporting sustainable forestry practices to reducing collision with buildings to expanding markets for bird-friendly products – target actions across the full life-cycle of birds, including nesting habitats in Canada and the U.S., migration routes throughout the hemisphere, and tropical overwintering habitats in Mexico and Central and South America.

The second half of the Plan highlights Migratory Bird Joint Ventures, their conservation challenges and successes, and the continental Watch List species they have responsibility for in their regions. For nearly 30 years, Migratory Bird Joint Ventures and other regional partnerships have worked to conserve millions of acres of essential habitat for the benefit of birds, other wildlife, and people. The Plan provides regional partnerships with important information on Watch List species, such as population trends, loss, and extinction risk, to aid in prioritizing and carrying out conservation actions across the full life-cycle of birds.

“Only by investing in strong, diverse partnerships throughout the Hemisphere and in the public, private, and industrial sectors, can we effectively create a sustainable landscape for all landbirds that breed, winter, and migrate through North America,” said Robert Ford, Coordinator for Partners in Flight.

The 2016 Landbird Conservation Plan Revision relies heavily on information provided by citizen scientists to present an improved vulnerability assessment for nearly 450 species, which allowed for assigning extinction risk and stewardship responsibility at different geographic scales. These new indicators provide a path towards stronger and more strategic conservation planning and action locally. It is an update from the 2004 North American Landbird Conservation Plan, which was the first continental assessment of landbirds.

The Partners in Flight mission is to maintain the abundance of birds fundamental for healthy habitats and functioning ecosystems in all regions and terrestrial habitats.