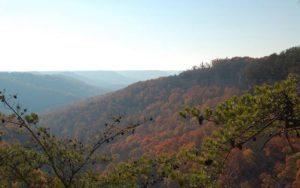 Forecastle Foundation funding will help to protect Kentucky’s Green River, a globally important freshwater resource, as well as some of the world’s most important reefs and oceanic diversity in the Pacific Ocean’s Coral Triangle.

Founded in 1951, The Nature Conservancy (TNC) is the world’s leading conservation organization. The Conservancy envisions a world where the diversity of life thrives, and people act to conserve nature for its own sake and for its ability to fulfill our needs and enrich our lives. Through dedicated efforts to protect nature, the Conservancy has more than 600 scientists located in all 50 US states and in more than 35 countries, which allows them to make an impact both locally and globally.

“The partnership with The Nature Conservancy represents a long-term vision and priority to protect and improve the land, waterways, wildlife and people on our diverse and finite planet,” said JK McKnight, founder of the Forecastle Foundation.  “TNC shares this vision of a healthy planet, rich with diversity to sustain us all, and we believe this alliance will impact the world in a multitude of naturally awesome ways.”

The Conservancy takes on tough issues facing conservation today – from climate change to coral reefs, to energy development in a growing world – to make a collaborative and lasting impact on the environment.

“The Nature Conservancy is thrilled to partner with the Forecastle Foundation to advance awareness and understanding of our work,” says David Phemister, State Director for The Nature Conservancy’s Kentucky Chapter. “The Foundation has demonstrated a keen interest in supporting conservation both here in Kentucky and around the globe. Their energy and enthusiasm is inspiring, and we welcome the chance to tell our story to a young, diverse audience eager to engage and take direct action to improve their neighborhoods, hometowns, and places much farther afield.”

Funding from the Forecastle Foundation will benefit three projects:

Through support of Kentucky Natural Lands Trust, the Forecastle Foundation is already funding one of the most unique and biologically diverse sections of the Central Appalachians, the Pine Mountain Wildlife Corridor. This project is the largest landscape conservation project ever undertaken in the state. The distinct ridge formed by Pine Mountain in southwestern Kentucky serves as a migration path and refuge for hundreds of species, some of which are found nowhere else in the world.

“This new partnership also affords us the opportunity to expand our conservation support across the entire Central Appalachian while compounding the efforts of Kentucky Natural Lands Trust in the Pine Mountain Wildlife Corridor,” said McKnight.

In a striking illustration of the interconnectedness of life on earth, the project in Kentucky is linked to the Foundation’s second project in Parana, Brazil, by the migration of several neotropical species. The collaborative project between the Forecastle Foundation and the Guayaki Foundation will help ensure restoration, preservation and long-term stewardship of 3,000 acres of South American Atlantic rainforest.

Articly by The Nature Conservancy.

« Free Wildlife Workshop Series Offered for NC Piedmont Landowners
Conservation: What’s Good for One can be Good for Many »