Posted on Wednesday, August 21st, 2013 by aadmin | Comments Off on Pennsylvania Might Delist Bald Eagle 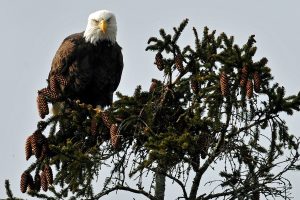 With its numbers in Pennsylvania continuing to soar ever higher, the bald eagle soon could be removed from the state’s list of threatened species.

The Pennsylvania Game Commission’s Bureau of Wildlife Management is recommending the bald eagle be upgraded from “threatened”  to “protected” status statewide.

Doug Gross, a biologist who heads the bureau’s Endangered and Nongame Birds section, addressed the Pennsylvania Board of Game Commissioners at the board’s working group meeting on Monday, saying the bald eagle’s remarkable comeback in Pennsylvania has reached a point where eagles safely can be removed from threatened species list.

As of Monday, Gross said, 266 nesting pairs have been confirmed statewide so far this year.  And while that count is not final and the number of confirmed nesting pairs still could rise, the updated figure represents the continuation of an upward trend in Pennsylvania.

“This year marks just another high point in the spectacular and widespread recovery of bald eagles in Pennsylvania, and it’s clear that the definition of a threatened species no longer describes them accurately,” Gross said.

According to Pennsylvania regulations, a threatened species is defined as one that, throughout its range in the Commonwealth, may become endangered in the foreseeable future.

The Bureau of Wildlife Management’s recommendation to delist the bald eagle as a state threatened species is based on eagles achieving a number of goals outlined in the state’s bald-eagle management plan.

The plan calls for delisting eagles as threatened if all of four criteria are met for five consecutive years. There must be at least 150 active nests statewide; successful pairs in at least 40 counties; at least a 60 percent success rate of known nests; and productivity of at least 1.2 eaglets fledged per successful nest.

Three of those criteria already have been met for a five-year span, and eagles in 2013 will exceed for a fifth-straight year the requirement of nesting successfully in at least 40 counties, Gross said. Determining nest success is the biggest challenge in eagle monitoring and the agency welcomes information about the success and productivity of nests, Gross said.

The proposal to delist will be made formally to the Board of Game Commissioners at the board’s regular meeting in September. The board then could choose to vote on the proposal at a subsequent meeting. That process will afford the public with an opportunity to comment on the proposal, Gross noted.

Pennsylvania Game Commission Executive Director Carl G. Roe noted the proposal to delist comes in the 30th anniversary year of the agency’s first efforts to restore bald-eagle populations statewide. When the Game Commission launched its restoration program in 1983, only three pairs of nesting eagles remained in the state – all of them located in Crawford County, in northwestern Pennsylvania along the Ohio border. At that time, eagle populations had been decimated by the effects of water pollution, persecution and compromised nest success caused by organochlorine pesticides such as DDT.

“It seems that each passing year writes a new chapter in the story of the bald eagle’s success in Pennsylvania and the latest numbers, and the recommendation to delist the eagle as a state threatened species, is the best news yet,” Roe said. “But the story isn’t over. Pennsylvania has plenty of good bald-eagle habitat that’s not currently being used by eagles. And as the years roll on, I’m sure eagles will give us plenty more to celebrate.”

Gross said removing bald eagles from the state threatened species list would neither hinder eagle populations in Pennsylvania nor knock off course the species’ comeback here.

If the bald eagle is delisted, the bird will continue to be protected under the federal Bald and Golden Eagle Protection Act (the Eagle Act), the Migratory Bird Treaty Act, and the Lacey Act. Under the Eagle Act, those who harm or disturb eagles are subject to a civil penalty of up to one year in jail or a $5,000 fine for their first offense, and criminal convictions can result in fines as high as $250,000.

“We will not be abandoning the bald eagle, but giving it less emphasis as we turn to new challenges in bird conservation in the state,” Gross said.

The Game Commission, too, will continue to follow its bald-eagle management plan, which calls for the agency to monitor nests, at least through 2017.

Likewise, the commission will continue to urge those who encounter eagle nests to keep their distance, and not do anything to frighten the birds. The agency has recommended that people get no closer than 1,000 feet from any eagle nest.

Any behavior that causes adult eagles to fly from the nest could compromise the success of that nest. They are more likely to abandon a nest disturbed early in the nesting cycle.  Additionally, eaglets can respond to frightening situations by trying to fledge the nest prematurely, and sometimes die as a result.

A wealth of information on bald eagles, where to view them and proper nest etiquette is available at the Game Commission’s website, www.pgc.state.pa.us by clicking on the bald eagle viewing icon, Gross said.

The bald eagle was delisted as a state endangered species and reclassified as a threatened species in 2005, when about 100 nests were confirmed statewide. Especially when considering the sharp jump in eagle populations since then, it might seem hard to believe just how bleak the eagle’s future appeared just 30 years ago, when restoration began.

Initially, 12 seven-week-old eaglets were taken from nests in Saskatchewan and brought to specially constructed towers at two sites. At these towers – at Haldeman Island on the Susquehanna River near Harrisburg, and at Shohola Lake in Pike County – the birds were “hacked,” a process by which the eaglets essentially are raised by humans, but without knowing it, then released gradually into the wild.

In all, 88 bald eaglets from Canada were released from the sites as part of the program, which was funded in part by the Richard King Mellon Foundation of Pittsburgh and the federal Endangered Species Fund.

Today, bald eagles inhabit 56 counties statewide and they continue to push the boundaries of their range. Just this year, three pairs of bald eagles nested in Allegheny County, two of them within the Pittsburgh city limits.

Gross said that in addition to nesting along the state’s major rivers and lakes, bald eagles now are nesting along medium-sized high-quality streams with good fishing and alternate foraging areas.

“They are teaching us that there is a lot more eagle habitat in Pennsylvania than we imagined,” Gross said. “Eagles are adopting the kinds of quality places that outdoors people also enjoy.”

And with more habitat to be taken over, Roe predicts further growth will follow.

“It’s something of which every Pennsylvanian can be proud,” he said.

The Pennsylvania Board of Game Commissioners will meet  Monday, Sept. 23 and Tuesday, Sept. 24 in Westmoreland County. The meetings will be held at the Lamplighter Restaurant, 6566 William Penn Highway, Delmont, Pa. The board will hear public comment and agency staff reports Sept. 23, beginning at 8:30 a.m. Individuals interested in offering public testimony – limited to five minutes – can begin to register at 7:45 a.m. on a first-come, first-to-speak basis. Then on Sept. 24, the board will take up its prepared agenda at a meeting beginning at 8:30 a.m. A copy of the agenda for the upcoming meeting will be posted at a later date.

The Game Commission has relied on volunteers in its efforts to monitor bald-eagle nests statewide, and the support of volunteers will be needed more than ever as the agency attempts each year to compile an increasingly comprehensive list. Perhaps the easiest way to report a nest is to contact the Game Commission through its public comments email address: pgccomments@pa.gov, and use the words “Eagle Nest Information” in the subject field. Reports also can be phoned in to a Game Commission Region Office or the Harrisburg headquarters.

« Military Move to More Lead-Free Ammunition Could Save Millions of Birds
Ohio to Establish more than 28,000 Acres of Pheasant Habitat »